On 16 January 2022, Maharashtra Chief Minister Uddhav Thackeray inaugurated two football pitches at the Center of Excellence (COE) in Kharghar. The two pitches have been developed by the City and Industrial Development Corporation (CIDCO).

Apart from these two world-class football pitches, the Center of Excellence in Kharghar will also have a 40,000-capacity FIFA-approved stadium, a golf course, a rugby stadium, and a shooting range. These 2 training pitches will be handed over to the AFC for use in the Women’s Asian Cup India 2022 and will also be used in the FIFA U-17 Women’s World Cup India 2022 in October. 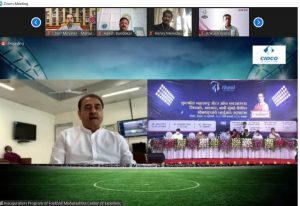 AIFF President Praful Patel said, “Makar Sankranti is a very auspicious occasion to inaugurate such a world-class facility at the hands of such honorable people. I thank CIDCO for taking up this initiative and developing world-class infrastructure in such a short time. Navi Mumbai has the ability to consistently deliver for the big stage.”

He further added, “I am personally very happy to see the first world-class FIFA stadium coming up in Navi Mumbai which also played host to the FIFA U-17 World Cup in 2017 and will continue to do so for the Women’s Asian Cup 2022 and the FIFA U-17 Women’s World Cup in October. I thank Aditya Thackeray for his efforts. The government of Maharashtra along with Aditya have given us their fullest support in trying to make India a footballing nation. I am happy to see that we are making efforts to bring football in all the districts of Maharashtra.”

Aditya Thackeray, President of MDFA said, “it is really a dream come true for me. I, being a very avid football lover, always wanted to do something for the game of Football. CM Uddhav Thackeray too took interest in the project. I remember when I went along with Praful Patel Sir and others to watch the FIFA World Cup in 2017 at D Y Patil stadium, we were delighted to see the excitement among the football players and the lovers of the game. It is really a great initiative by CIDCO to bring such a beautiful infrastructure and also to get two football pitches ready ahead of the upcoming football matches. I know that CIDCO Vice Chairman and MD Dr. Sanjay Mukherjee too is a football lover and the reason he took a keen interest in the project. I am very much confident that in the days to come Navi Mumbai will become a sports city.”

Maharashtra Chief Minister Mr. Uddhav Thackeray expressed happiness and said, “I can proudly say that this is one of the happiest days of my life. We are always focused on work and sometimes we forget about hobbies. I am glad that we are encouraging outdoor sports again which I felt we were slightly lagging behind.”

He sounded optimistic and said, “I wish that one day we can put out an Indian team in a World Cup on this ground because of these facilities. We want to fulfill the dreams of young boys and girls through this facility.”

“I have discussed how to improve infrastructure for developing non-cricket sports and I am confident that under the leadership of the Maharashtra government, football will become the No.1 sport in Maharashtra,” concluded Mr. Patel.

Mumbai hosted international football in 2016 after a hiatus of 61 years, since then the city has been focusing heavily on football. The turnout at the 2017 FIFA U-17 World Cup was huge. Since then the Indian national team has played several matches in Mumbai. Also, Mumbai city’s ISL win in 2021 gave a major boost to the growth of football in the city. This top-class facility will not only give an opportunity to the locals to play but the state-of-the-art infrastructure will also shape the future of the upcoming footballers of Mumbai.

IR Iran poised for AFC Women’s Asian Cup bow against ‘strong and fast’ India
We represent the girl child who has been deprived, Blue Tigresses say in unison