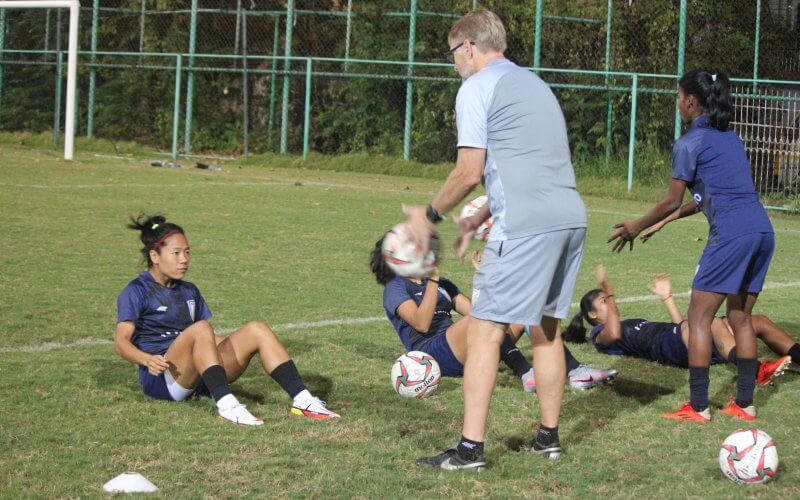 MUMBAI: The Islamic Republic of Iran will be making their AFC Women’s Asian Cup debut after coming through the qualifiers in a dramatic fashion with a penalty shootout win over Jordan.

“We are extremely excited, and happy to be a part of the AFC Women’s Asian Cup India 2022. It is a proud moment for us, and we will do our best to be successful,” said captain Behnaz Taherkhani at the official pre-match press conference held earlier today (Tuesday, January 18, 2022 – two days prior to the kick-off of the match). “Our aim is to gain a lot of experience from this tournament. We know we have a long way to go, but being here is a good start.”

Iran begin their campaign against hosts India in a Group A match on the opening day of the Continental Championship on January 20. Chinese Taipei and China are the other two teams in the group.

Nicknamed ‘Team Melli Baanovaan’ (Ladies National Team), IR Iran played their first International match as recently as 2005, in the WAFF West Asian Women’s Football Championship, when they beat Syria 5-0. They have come a long way since then, and are currently ranked 70th in the world, and 14th in Asia in the FIFA rankings.

IR Iran were clubbed alongside Jordan and Bangladesh in the qualification round for the AFC Women’s Asian Cup India 2022. A five-star performance saw them defeat Bangladesh 5-0 in their opening game, but so did Jordan – thus, setting up a winner-takes-all clash between the two (IR Iran and Jordan) in the final game.

“Despite our lack of experience, the team is motivated, and works hard,” said Head Coach Maryam Irandoost. “We have reached this level. We are ready.”

One of the players to watch out for will be forward Afsaneh Chatrenoor, who scored the winning goal against Gokulam Kerala FC in the AFC Women’s Club Championship in 2021 and also finished as the tournament’s joint top-scorer.

Fellow forward Hajar Dabbaghi also boasts of a good goalscoring record at the age of 22, having netted five times in the AFC Olympic qualifiers, and will be looking to test Ashalata Devi-led Indian defence.

“We have analysed the Indian team, and are aware that they are strong and fast. The opener is one for everyone to look forward to,” concluded Irandoost.

Iran begin their campaign against hosts India on January 20, 2021, at 7:30 PM IST at the D.Y. Patil stadium in Navi Mumbai and the match will be broadcast live on the Eurosport channel and streamed live on Jio TV.