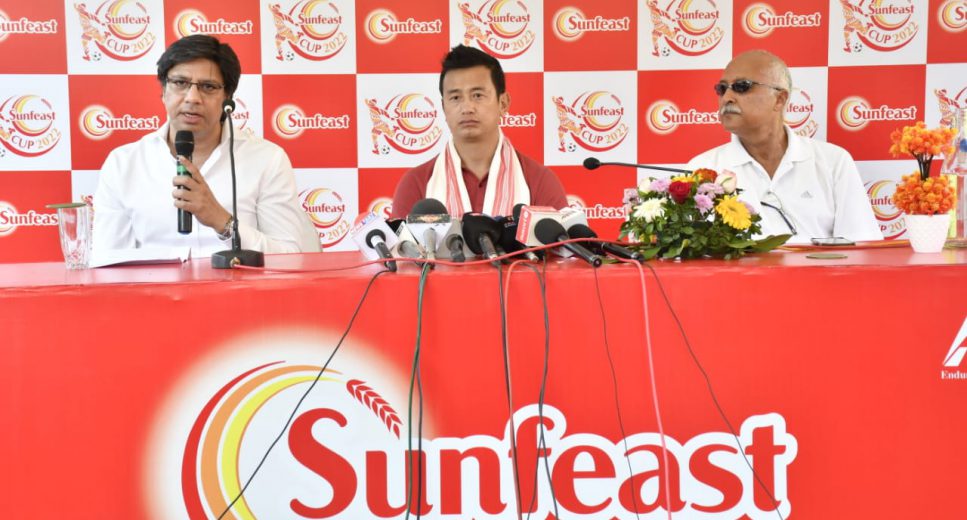 The 6th edition of Sunfeast Cup Football Tournament 2022 powered by Sunfeast Bounce, which began on September 26th, 2022, concluded successfully with over 2700 players displaying their skillset and passion towards football.

Since its inception in 2015, Northeast’s most prestigious football tournament has helped over 20000 players showcase their talent. Former Indian Captain Bhaichung Bhutia graced the final event at the Sports Authority of India (SAI) Football Ground in the city and presented the winning Manipur Marshals (U-13) & Manipur Marshals (U-16) team with the prestigious Sunfeast Cup trophy.

ITC’s Sunfeast has been reaching out to aspiring football players from a variety of schools and clubs over the course of the past one and a half months. One of Sunfeast’s popular brands, Bounce, has been directly engaging with school kids in the region and spreading the love for football through fun & interactive games.

In this high-stakes league, teams from some of the best clubs and schools in the region competed against one another for the prestigious trophy. The league witnessed matches between 246 teams from clubs/ schools, with stellar performances and extraordinary efforts from the youngsters.

The U-13 final was contested between Meghalaya Masters and Manipur Marshals. The U-16 final was played between Meghalaya Masters and Manipur Marshals. Manipur Marshals (U13 & U-16) won the sixth edition of the Sunfeast Cup. This annual initiative by ITC Sunfeast has received high praise from all parties involved, including sports administrators, coaches, and the parents of participants. Over the past years, it has grown to be one of the most aspirational tournaments for football enthusiasts in this region.

Commenting on the league, Mr. Ali Harris Shere, Chief Operating Officer, Biscuits & Cakes Cluster, Foods Division, ITC Limited said, “We are delighted to announce the Sunfeast Cup 2022 winners. The tremendous public support for the brand’s initiatives to further elevate the popularity of football in the region has encouraged us to engage with more budding players in the Northeast region. Football has always been one of the most popular sports in the country, and a platform like Sunfeast Cup has contributed significantly in encouraging football fans to take up the sport from a very young age. In fact one of our leading brands, Sunfeast Bounce, is championing the cause of instilling the love of football amongst kids and has planned various engaging activities in around 10,000 schools across the country to promote the sport. We at ITC are proud to have created a football ecosystem that nurtures young talents who will undoubtedly make India proud in the future.”

The legendary Indian footballer, Bhaichung Bhutia averred, “It’s my pleasure to be associated with Sunfeast Cup which is promoting and nurturing football talent at the grassroots level. Northeast has always been an epicenter for sports enthusiasts in India. Sunfeast has been providing the right platform for the children to hone & showcase their football skills at a professional level. I hope to see some of these talents representing India in the coming days.”

Since the tournament’s inception, more than 2000 teams from various parts of the Northeast have competed for the title of football champions. Sunfeast Cup has consistently worked to create a favorable sporting environment and has produced promising football players, such as Maheson Singh Tongbram, captain of the Indian national U16 and U17 football teams. Other players who rose to prominence as a result of the Sunfeast Cup include Yaikhom Pritam Singh, Fairly Suting, and Shemjingmut Kharmyndai. They are competing in various state leagues and have won the hearts of football fans across the country.