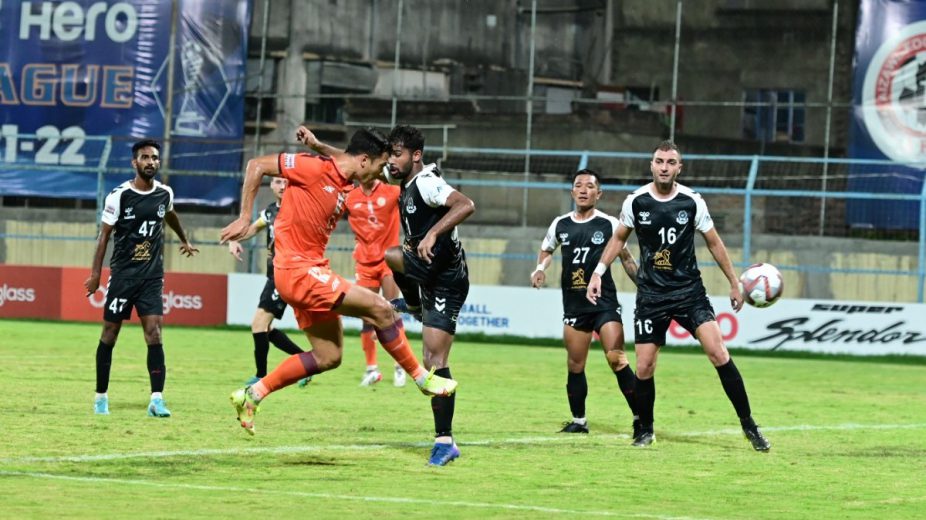 Mohammedan Sporting Club stayed second in the Hero I-League 2021/22 after a 3-1 loss against RoundGlass Punjab FC, here at the Naihati Stadium. Two Kurtis Guthrie strikes and super-sub Rupert Nongrum’s tap-in were enough to secure all three points for RoundGlass Punjab. Nikola Stojanovic’s first-half volley was the only goal scored by Mohammedan.

Three of the four goals came in the first half of the game. Kurtis Guthrie opened the scoring for Roundglass Punjab in the tenth minute, moments after Mohammedan spurned an opportunity to score. Guthrie drifted in and took on two Mohammedan defenders before slotting the ball past a rooted Zothanmawia, who could only look at the ball roll into the back of his net.

An opportunity to equalise fell to Mohammedan when Andelo Rudovic was brought down on the edge of the Punjab box. Rudovic took the freekick and placed it nicely on target but Jaspreet Singh palmed the winger’s attempt comfortably. Minutes later, Rudovic attempted to score from another set-piece but this time it was off target.

Parity was restored just after the half-hour mark when Nikola Stojanovic pounced on a dropping ball and smashed a beautiful left-footed volley past the diving goalkeeper. The joy of this much-need equaliser for Mohammedan was short-lived as just four minutes later, Roundglass Punjab reinstated the one-goal advantage courtesy of Kurtis Guthrie again.

After equalising, Mohammedan were desperate to take the lead. Their focus on attack made them complacent at the back, which allowed Guthrie to waltz through the defence and slot the ball past a helpless keeper. The Mohammedan defence was still unsettled and almost allowed Guthrie to bag a first-half hat-trick. Keeper Zothanmawia denied the attacker brilliantly.

In the second half, Marcus Joseph came to life. Roundglass Punjab had managed to keep the prolific striker quiet in the first half but the Trinidadian striker managed to trouble the solid defensive line of Punjab. Joseph was denied a goal by Josef Yarney, whose well-timed tackle dispossessed Joseph before he could do any damage.

Moments later, Joseph was denied again, this time by the Jaspreet Singh who charged towards the ball and palmed it away to safety. Frustration grew in the Mohammedan camp as the referee booked manager Andrey Chernyshov for dissent in the technical area. Capitalising on the restlessness, Roundglass Punjab established a two-goal cushion eight minutes from time.

After winning a freekick on the right flank, almost near the corner flag, Joseba Beitia whipped the ball in towards Yarney, who headed the ball towards an unmarked substitute Rupert Nongrum. Nongrum carefully side-footed the ball into the net at the near post to put the final nail in the coffin.

A second loss of the season means Mohammedan cannot go to the top of the table and stay second after a dismaying result, two points behind leaders Gokulam FC and two clear of Roundglass Punjab in third.