Kenkre FC fall short by a goal against Churchill Brothers Despite taking an early lead in the second half, Kenkre FC suffered a 2-1 loss against Churchill Brothers in today’s I-League clash at the Naihati Stadium.

Kenkre assistant coach Kamalakant Singh took charge of today’s game instead of Head Coach Akhil Kothari, who missed due to suspension. The stand-in gaffer named three changes to the side from the last game. In came Padam Chhetri, Aniket Panchal, and Kenstar Khorshong. They replaced Tenzin, Aravindraj, and Arya.

Kenkre started proceedings and was quick in the attack. In the 6th minute, Aniket Panchal took a shot from 25 yards out and came close to scoring the first goal. His long-range effort got deflected off the woodwork.

Churchill Brothers gradually retained possession and created chances as well. As a result, in the 19th minute, Komron Tursunov came close to giving the Goan side the lead but Kenkre keeper Padam Chhetri made himself big and saved the former’s shot from close range.

A few minutes before the break, Kenkre forward Ranjeet tested the opposition goalkeeper on a couple of occasions but failed to find the netting. The first half ended in a cagey affair with both sides failing to convert chances. 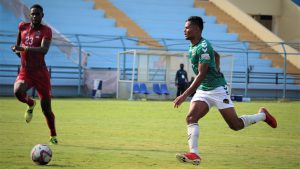 The second half kicked off with a flurry of attacks. Kenkre FC made the first attacking move and in the 49th minute, a cross from Suraj Negi sailed into the box and got deflected by Churchill defender Momo Cisse who put the ball in the back of his own net.

In the 60th minute, Kenkre had another chance to double their advantage but a free-header from Kiran went over the bar.

In the 75th minute, on the other end, the Goans replied. A cross from Lamgoulen found Komron Tursunov and he volleyed with perfection to equalize. In the 81st minute, Churchill Brothers doubled their lead, courtesy of Ikechukwu Kenneth’s goal.

After going down, Kenkre went in search of the leveler but it wasn’t to be as a few chances went on begging but the game ended in another defeat for the Mumbai-based side.

Next, Kenkre will take on Indian Arrows on April 15th.