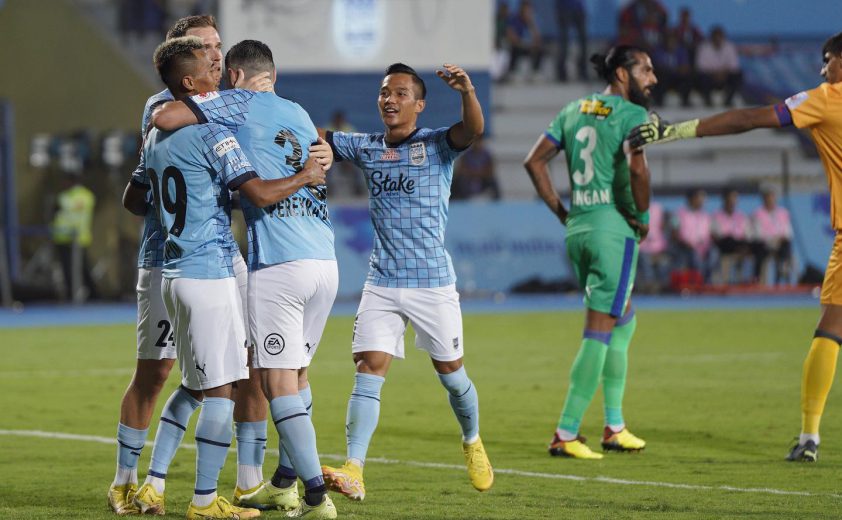 Jorge Diaz and Lalengmawia Ralte scored in the first half, while Bipin Singh and Lallianzuala Chhangte sealed a comfortable 4-0 win for the Islanders in the second half.

Mumbai City head coach Des Buckingham made one change to his starting eleven as Mandar Dessai was replaced at left-back by Vignesh D. BFC head coach Simon Grayson switched from a 4-4-2 to a 4-2-3-1 as Alan Costa replaced Aleksandar Jovanovic in defence. Skipper Sunil Chhetri dropped to the bench as Danish Farooq started on the left flank.

Diaz struck in the 14th minute to put the hosts in front, as he pinched the ball from Alan Costa who was caught napping in defence. The Argentinian striker took the ball off Costa’s feet, advanced towards the goal and slotted it past a rooted Gurpreet Singh Sandhu.

The Islanders doubled their advantage in the 32nd minute. Greg Stewart’s low cross from the right went past Bipin Singh and found an unmarked Ralte. The midfielder was given plenty of time and room in the box as he took a couple of touches before smashing it into the net.

In the 58th minute, Rahul Bheke’s long ball from defence caught the Bengaluru FC backline off-guard. Diaz skipped the offside trap and found himself in a one-on-one situation with the keeper. The striker unselfishly squared the ball to Bipin, who tapped it into an empty net to make it three for the Islanders.

The hosts then fired in their fourth of the evening in the 74th minute. Diaz’s pass was deflected by Sandesh Jhingan and found its way into Chhangte’s path. The winger wrapped his boot around it and placed it perfectly into the top left corner of the goal to wrap it all up.

The win takes Mumbai City FC within one point of Hyderabad FC, who are sitting at the top with a game in hand. The Islanders will play NorthEast United FC in Guwahati next on November 25, Friday. Bengaluru FC’s goal difference has dropped them down to tenth in the table with four points. The Blues will travel to Fatorda to play FC Goa on November 26, Saturday.