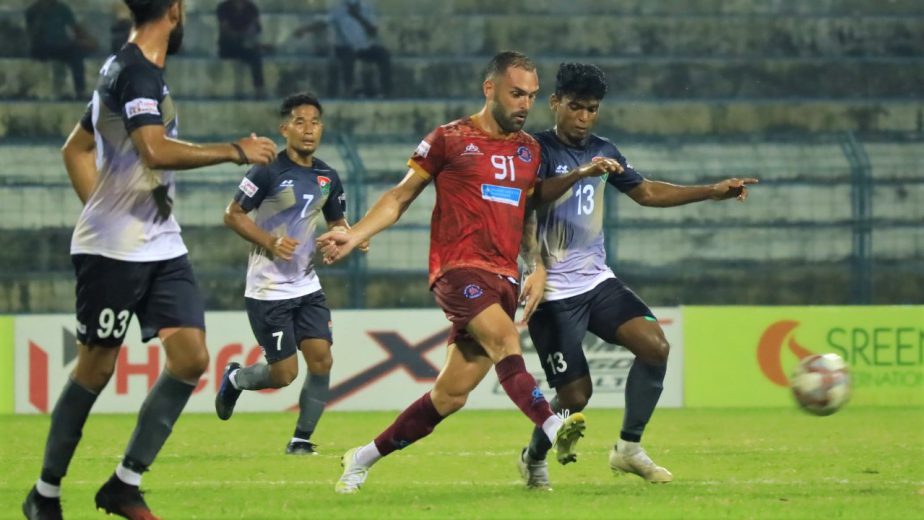 Drama, entertainment and chaos levels were at their peak as Rajasthan United came from behind to net a last-minute winner against Sreenidi Deccan whose head coach Fernando Varela was shown a straight red as Pedro Manzi scored in the tenth minute of second-half stoppage time to give his side a win after two back-to-back losses.

After bagging just one win in the last five games, both sides were desperate to clinch all three points. It was an evenly matched start after which the scale slightly tipped towards Rajasthan United. Five minutes in, Abhishek Ambekar came pacing down the left, cut inside and put his shot into the side of the goal.

Minutes past the half hour mark, Sreenidi took the lead against the run of play. A sublime through ball by Louis Ogana found Vanlalbiaa Chhangte in a good position. The midfielder smashed it past the keeper, giving his side a crucial lead out of nowhere.

The joy for Sreenidi did not last long as Rajasthan popped up with an equalising goal just three minutes later. Full-back Anil Chawan was at the end of a beautifully cushioned lay-off from Pritam Singh. Chawan took the ball on his left foot and slotted the ball home at the near-post.

A little bit of frustration crept into the game as Sardor Jakhonov picked up a yellow because of an unnecessary foul. The Uzbek forward lost his cool and tried to kick Mohammed Salah right under the referee’s nose. Jakhonov seemed to have been lucky to escape with only a yellow card for his action.

Five minutes from the half-time whistle, Ogana beat Ricky Shabong and was through on goal. Astoundingly, the Nigerian striker could not find the back of the net as his idea was good but the execution was poor. Both sides managed to hold on as the first half ended with parity in place.

Early in the second half, Pedro Manzi was in the box, right in front of goal when the ball flew in towards him. However, the Spaniard clashed with Sreenidi keeper Aryan Lamba in a crowded penalty area and play was eventually halted.

After making their passes stick, Sreenidi marched forward as Salah played a promising short pass into Ogana’s path. The Nigerian turned and struck the ball but could not do any damage with it. Minutes later, at the other end, Manzi was put clean through by Shabong as the finish was poor and Manzi was relieved to see the offside flag go up.

The Spaniard was involved in an incident after that opportunity. Near the halfway line, Manzi elbowed Muthu Mayakkannan while trying to retain possession. It seemed like it was intentional but the referee showed the attacker a yellow card and awarded Sreenidi a freekick.

Within the span of a minute, Sreenidi skipper David Munoz spurned two glorious opportunities. The first came from a cross from Phalguni Singh. Munoz was unmarked but his free header went wide. The second chance saw the Colombian at the end of a perfectly weighted through pass. Munoz expected Rajasthan keeper Bhaskar Roy to go down and ended up chipping the ball straight into the keeper’s gloves.

The momentum shifted in the final twenty minutes of the game as Sreenidi piled the pressure on and Rajasthan went on the back foot. Substitutes Lalromawia and Samad Mallick caused a few problems for the Rajasthan defence. Seven minutes from time, on the break Munoz was brilliantly denied by brave goalkeeping and Mallick’s attempt from the rebound was cleared off the line by Mauro Dos Santos.

Eight minutes were added on and chaos ensued. In the final minute of stoppage time, coach Fernando Varela was shown a red card, apparently, for dissent. As the Sreenidi coach was fuming while walking away from the dugout, Rajasthan capitalised on the distraction. A long ball was played into the Sreenidi box.

An awkward bounce made it difficult to clear or to collect as Manzi got on the end of it and slid the ball into the net from an extremely acute angle to snatch the winner in the last minute of the game.

A win for Rajasthan United saw them cut the gap to Sreenidi down to just one point. However, Sreenidi Deccan do have a game in hand.