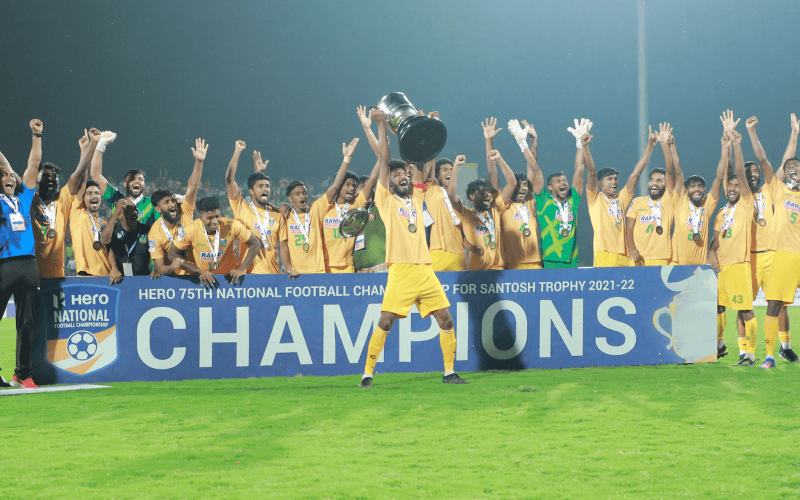 In an eventful summit clash, hosts Kerala came back from behind and eventually got the better of West Bengal 5-4 in a penalty shoot-out to emerge Champions of the Hero 75th National Football Championship for Santosh Trophy on Monday (May 02, 2022) at the Manjeri Payyanad Stadium in Malappuram. The hosts now have seven Hero Santosh Trophy titles to their name and it was the first time they won the competition on home soil since 1993.

It was West Bengal’s 46th final overall but they could not add to their record 32 titles and Kerala continued their recent dominance over West Bengal. They had beaten the same side in the first round, as well as in the 2018 Hero Santosh Trophy final, which had also gone to penalties after the game ended in a stalemate.

Dilip Orawn had given the away side the lead in the first period of extra time before a late equaliser to take the game to penalties from substitute Bibin Ajayan. Bengal’s second penalty was squandered by substitute Sajal Bag while Kerala had hundred percent accuracy to take the title home.

The first half was dominated by West Bengal. They not only managed to contain Kerala’s free-flowing attacking football but also managed to carve out quite a few decent openings. The first chance of the match came from Bengal’s first corner of the game. Swung in by Md Fardin Ali Molla, the ball fell to an unmarked Nabi Hussain Khan. His glancing header went just wide of the upright with Midhun V a mere spectator. 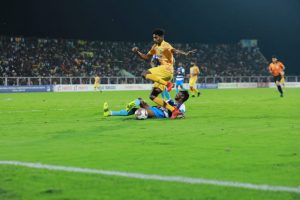 Bengal were pressing high and that led to quite a few interceptions in dangerous areas. A good early cross from Jay Baz down the right fell to Mahitosh Roy. He tried to go for a first-time volley but just could not get any purchase as it went behind for a goal-kick.

In fact, Mahitosh was guilty of squandering two more great opportunities. The first one came via a long ball played from the left flank. Again, the midfielder found himself free inside the box. He had time to get the ball under control but instead opted to take on the shot first-time. He could not get a clean contact as the attack petered out. 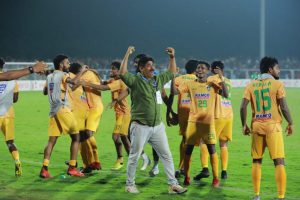 In the dying moments of the first half, Mahitosh created an opening for himself after a fine run down the left. He outmuscled his marker, made room for the shot but his effort from a narrow angle was well saved by Midhun. The Bengal player could have had a look up and spotted his teammates inside the box but opted to go for glory himself.

The Kerala players were probably feeling the pressure and were not their usual selves. But despite not playing to the best of their abilities, the hosts created two great chances to take the lead. The first one fell to Viknesh M who was put clean through on goal. With only Priyant Kumar Singh to beat, the forward’s wild effort went well wide. Kerala coach Bino George was quick to put on semi-final hero Jesin TK soon after. Priyant made a fine save from a Sanju G’s cross-cum-shot, tipping it over the bar as both teams entered the break level.

Kerala started the second half much stronger and dominated proceedings throughout. They created quite a few chances to break the deadlock. Their best chance came in the dying minutes of added time. A rare defensive blunder from Subhendu Mandi allowed Shighil the chance to win it right at the death. But Priyant made a fine save to take the game to extra-time.

In the first period of extra time, it was West Bengal who took the lead through Dilip Orawn. Supriya Pandit’s pinpoint accurate cross was met by a diving header from the winger which went beyond the reach of a diving Midhun.

Since scoring, Bengal were content with defending deep. They did not try to attack or try and hold on to the ball. And that extra cautious move almost paid off but the hosts, willed on by a capacity crowd, did not give up and got their just rewards. Noufal P.N’s brilliant cross was put in by substitute Bibin Ajayan as the crowd went wild with joy.

That meant, the match went to penalties and both sides played mind games. Both teams made goalkeeper changes at one point, Priyant even took a penalty. Sajal Bag’s missed penalty meant Kerala won the penalty shoot-out 5-4 to win their seventh Hero Santosh Trophy title as fireworks illuminated Malappuram’s sky and wild celebrations in the stands ensued.

The individual prizes are as follows-