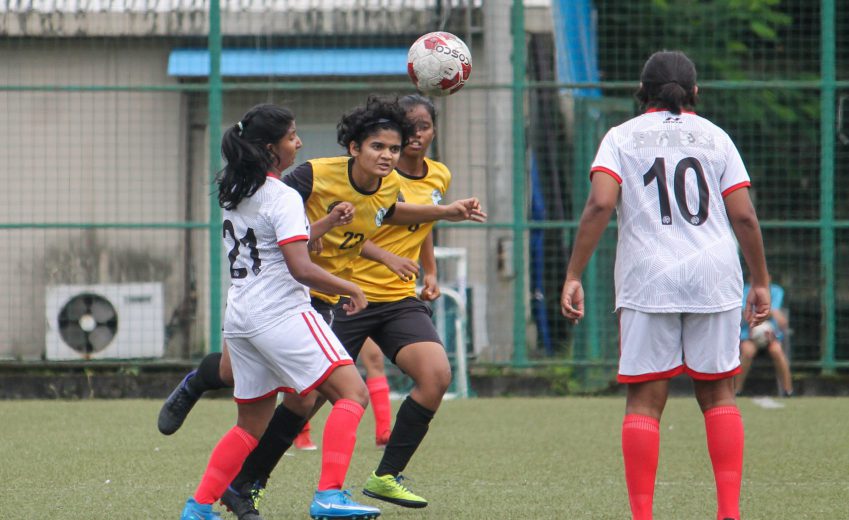 Match 25 – The first game after the 12-day break saw FSI – Navi Mumbai taking on Mumbai – Footie First. The match ended in a goalless draw with FSI – Navi Mumbai picking up their first point of the competition.

Sunday evening encounter saw one of the tournament favorites Mumbai Knights making a short work of Puneri Warriors FC with a 7-0 win. The Pune side showed some good resilience early in the first half with Alexandra Eccard being the only one managing to break the deadlock. However, the floodgates broke right out in the second half, as the In-form striker Priyanka Sujeesh struck a quick-fire hat-trick while substitute Riya D’souza added one to make it 5-0 as the game entered the final 15 minutes.

Valencia D’mello then added two quick goals in the dying minutes to close out the game 7-0. Courtesy of the Hattrick, Priyanka leapfrogged PIFA striker Sasmita Behera to top the goal-scoring charts.

Monday Morning encounter saw PIFA retaking their top spot after beating Warriors of Kolhapur SC 2-0 in Match 27 of WIFA Women’s League. Dolly Kumari opened the scoring in the 32nd minute to put PIFA in lead. Captain Karen Pais then doubled the lead in the second half to put PIFA in a comfortable position in the game.

Match 28 of the tournament saw Kenkre FC pull of a brilliant 4-0 win over Aspire FC to enter the top 4 of the competition. A sensational performance from Ankush saw the star striker score a brilliant hat-trick allowing Kenkre to find an early grip in the game. Nishka Prakash chipped in with one goal in the second half to make it 4-0.

The hat-trick puts Kenkre forward Ankush in the second place in top scorer rankings with 8 goals, one behind Priyanka but ahead of the previous winner Sasmita Behera and Mumbai Knights Valencia D’mello

FC Goa dedicates the 2022-23 home jersey to the return of fans to the stadium
Warriors of Kolhapur SC confirm top 4 finish, Aspire FC keeps pace with Kenkre for the fourth spot