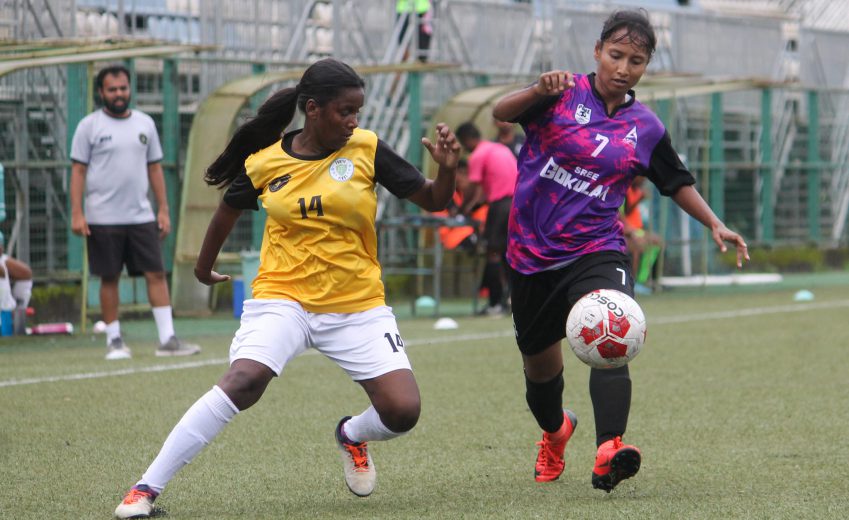 A 1-0 win confirmed Warriors of Kolhapur SC top 4 finish ensuring a place in the next round of the campaign while Aspire FC were held to a 1-1 draw against Footie first as the 4th spot still awaits.

Wednesday morning game saw FSI Navi Mumbai pick their first win of the campaign after a 3-0 win over wooden spooners Lawless United. Vidisha Sawant and Ritu Walmiki put FSI ahead with goals in the first half before a Bhoomi Nagda struck the third early in the second half to complete the 3-0 route.

In the second game of the day, Warriors of Kolhapur SC confirmed their place in the next round after edging Puneri Warriors 1-0 in a close affair. It was a close game with both sides going close numerous times only to be wasteful in front of the goal. In the 38th minute, Warriors of Kolhapur SC got a lucky break when a free-kick chance saw a melee inside the Puneri defense before Samruddhi Katkole struck one past the keeper to make it 1-0. The win cements Kolhapurs’ league table position to 3rd spot behind PIFA SC and Mumbai Knights who are in the race for the top spot.

The Thursday morning encounter saw two Mumbai outfits Kenkre FC and Mumbai Knights take on each other. Continuing on their unbeaten run this season Mumbai Knights started brightly but were up against some stiff defending from Kenkre side. Velanie Fernandes broke the deadlock midway through the first half. A short corner routine saw Namrata send in a deep cross into the far post which was head home by Velanie to make it 1-0 for the Knights.

In the second half, Coach Steven Dias rang in a number of changes, the fresh legs helped as substitute Abeer Arsiwala made a run deep into the Kenkre box before her cutback found Valencia tapping it in to make it 2-0. A few minutes later, a cross from Neha true was handled inside the box by a Kenkre defender as Referee pointed to the spot-kick. Second-half substitute Kimberly Fernandes made no mistake in striking it past the keeper to make it 3-0.

In the evening fixture, Aspire FC were held to a 1-1 draw by Mum-Footie First. Footie first broke the deadlock in the 10th minute when a free kick ball was put behind the defense line before Nandini Balla struck a powerful shot past the diving keeper to make it 1-0.

Needing a win to topple Kenkre from the fourth spot, Aspire FC pressed hard in search of goals and were eventually rewarded in the dying minutes of the half when Aspire midfield managed to break from the center before placing inside the net by Murial Adams. Despite coming close a number of times in the second half, Aspire failed to find the net again as the game ended 1-1.