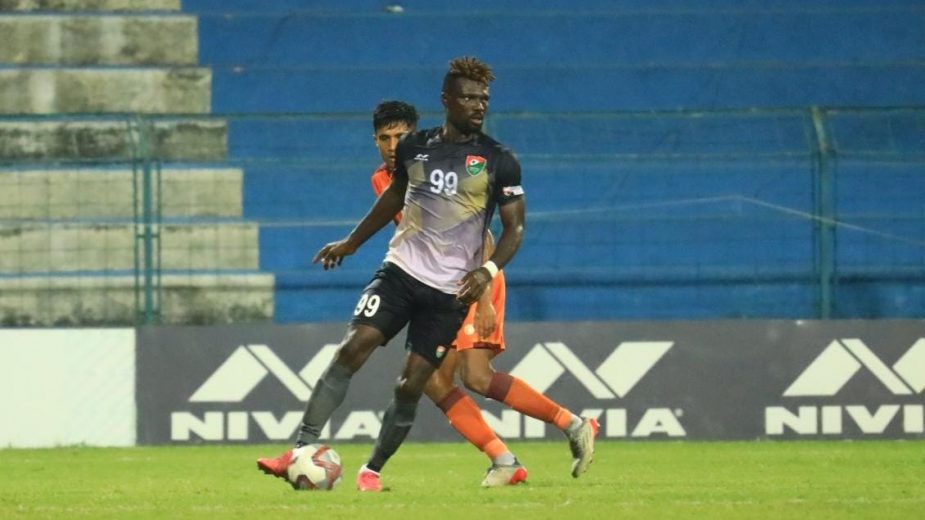 Louis Ogana hammered a brace as Sreenidi Deccan FC defeated RoundGlass Punjab FC 2-0 on Saturday in the Hero I-League, here, at the Kalyani Stadium. RoundGlass dominated the contest in terms of ball possession (52%), but Sreenidi created and converted more chances.

Sreenidi Deccan kicked off the game on a high note as they controlled the tie in the midfield with their slick passes. They enjoyed the ball possession early on and were collaborating well with one another. In the meantime, RoundGlass tried to counterattack, and their tactic paid off, with Kean Lewis’s shot from beyond the box giving them their first big chance in the fourth minute. However, his attempt was wide.

Sreenidi continued piling pressure on their opponents and also won two back-to-back corners in the 11th and 15th minutes respectively but it did not transpire into anything. Louis Ogana broke through RoundGlass’ compact defence in the 17th minute with a first-time finish. Sriram Boopathi set up Ogana with a superb defence-splitting pass from midfield, and the attacker made no mistakes as he hammered the ball into the back of the net to put his team ahead.

After conceding the first goal, Punjab stepped up their onslaught in pursuit of an equaliser and came close to doing so in the 21st minute but Kurtis Guthrie’s header flew wide after Aakash Sangwan used a fantastic cross to set him up.

In the 35th minute, Sreenidi Deccan’s second-best chance came when Colombian attacker David Castaneda Munoz set up Lalromawia with a near-perfect pass in the danger zone. The Indian midfielder, though, missed the chance as his attempt went over the crossbar.

RoundGlass Punjab came out strong in the second half as Robin Singh set up Maheson Singh Tongbram with an incredible pass, but the latter’s shot flew over the bar.

As the hour mark approached, RoundGlass Punjab’s need for an equaliser increased their intensity, resulting in Kurtis Owen Guthrie getting handed a yellow card in the 60th minute.

Ogana doubled Sreenidi Deccan’s lead in the 70th minute with a stunning goal. Ogana laid the foundation for the goal by finding Phalguni Singh in the six-yard box and passing the ball to him from the left side. Phalguni played it back to him moments later, and the Ghanaian made no mistake as he rattled the back of the net with a thunderous strike.

Kurtis Guthrie took a shot from within the box in the 81st minute to narrow the gap for his team, but it was securely collected by opposing goalkeeper Aryan Niraj Lamba. He looked to create another chance for RoundGlass in the 89th minute but his teammates failed in collecting his well-placed cross. Guthrie almost scored a consolation goal for his side during the stoppage time but his header was saved by Lamba.

Ogana collected the Hero of the Match award as Sreenidi Deccan recorded its first victory in phase 2. They will next take on league leaders Gokulam Kerala on Tuesday while RoundGlass Punjab face NEROCA FC on May 14.

Also Read: A new Narzary on the block: Apurna shines for Indian Arrows

A new Narzary on the block: Apurna shines for Indian Arrows
Unbeaten Sethu eyes a cautious start against PIFA