Odisha Police eked out a 1-0 win against Mata Rukmani in their second match of the Hero Indian Women’s League 2022 played at the 7th Battalion Ground on Tuesday, April 19, 2022.

Odisha Police earned an early free-kick on the 5th minute as Sarojini Tirkey drew a foul in a dangerous area. However, the local club couldn’t capitalise on the free-kick. Subsequently on the 17th minute, Arati Khadia found an opportunity to score as she cut in from the left flank. Unfortunately, her attempt on goal missed the frame by whiskers.

At the other end, Mata Rukmani too had a chance to take the lead before half-time, but forward Priyanka Kashyap hit the side netting as the scoreline remained 0-0. 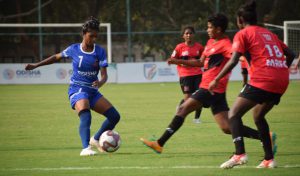 After the restart, Sarojini Tirkey again found herself in a goal scoring position. This time, she completely missed the target. Odisha Police looked quite composed in the second half and found some good breakthroughs. In the 72nd minute, they almost took the lead when Jharana Mallik attempted a cross from the right flank.

To everyone’s surprise, the ball looked certain to end up in the net, but was halted in its tracks by the crossbar. Mata Rukmani defenders were quick to react and cleared the ball as soon as it dropped to the ground.

Finally, Odisha Police’s efforts paid off on the 84th minute when substitute Jasmani Samad found the target from inside the box to give her side the lead. Mata Rukmani made a double substitution in an attempt to score the equaliser but to no avail. The referee blew the full-time whistle as the game ended 1-0 in Odisha Police’s favour.