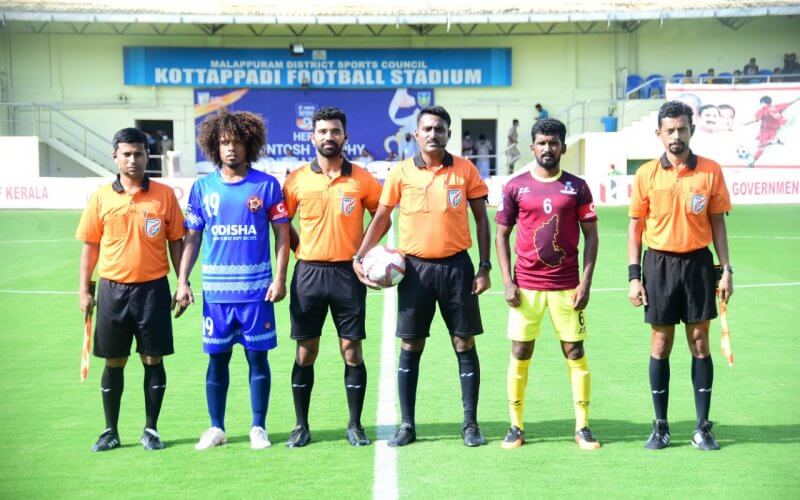 The opening game of Group B in the final round of the 75th Santosh Trophy at the Kottappadi Football Stadium was an exhilarating encounter as Odisha and Karnataka played out a 3-3 draw. Odisha got their noses in front but Karnataka struck back with three goals, putting themselves 3-1 up in the game. However, it was Odisha who had the last laugh as they leveled the scores.

It was Odisha who started brightly of the two, putting Karnataka on the back foot right from the start. Their high press awarded them the lead in the 15th minute. Chandra Muduli played in a perfect low cross to find Jamir Oram to convert easily. Karnataka stepped up their game after going down and almost found their equaliser when Sudheer Kotikela narrowly put wide a shot/cross from Prashanth. At the half-hour mark though, Karnataka were able to find their equaliser through Sudheer, who made amends for his earlier miss with a simple tap-in from an inch-perfect cross by Prashanth Kalinga. 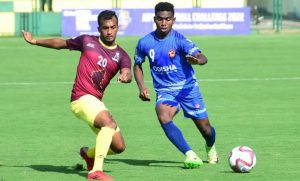 Three minutes later, the Southern state turned the game on its head. Bavu Nishad gained possession high up in Odisha’s half, unleashing a fierce shot which was deflected into the back of the net. Kamalesh proved to be a menace keeping Odisha’s defense busy with his dribbles and crosses. He even stole a ball in the opposition half only to see his shot go wide. Odisha failed to get a grip on the game after their opening goal, losing the ball frequently in midfield. The first half ended with Karnataka in the ascendancy.

Odisha started the second half in the same fashion as they did the first. A long throw from Abhishek Rawat was flicked on by a blue shirt onto the crossbar. Karnataka’s Arun Kumar then drilled a powerful free-kick which skipper Sekhar Behara saved. Odisha got a chance on the other end with Chandra Muduli again making a run but failing to link up with Raisen Tudu in a dangerous position. Just past the hour mark, Karnataka made it 3-1 with Sudheer getting his second after Behara failed to keep his powerful drive away.

Odisha got back into the game soon after from a mistake in the Karnataka defence. A corner from the right fell kindly to Bikash Kumar Sahoo’s head who guided the ball back into the net with the defenders stranded. Karnataka kept attacking though, with Kamalesh hitting the woodwork. 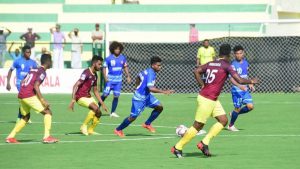 Moments later, Odisha leveled the scores in stunning fashion. Muduli slammed his effort into the top right corner of the net from a counter. Eventually, Karnataka were made to rue the missed chances that felt to them. Odisha keeper Chinmaya Sekhar Bahara pulled out one last save from substitute Ankith’s dipping long shot to prevent any more goals on the day.

Odisha will take on Manipur in their next outing in the 75th Santosh Trophy while Karnataka will hope to do the same against Gujurat, with both games scheduled on Tuesday, 19 April 2022.