Manipur served up the big upset of the 75th Hero Santosh Trophy so far by beating defending champions Services 3-0 in their group encounter here, today. The scoreline was an accurate representation of the desire, hunger and creativity Manipur displayed through the ninety minutes to outplay the defending champions off the park.

Manipur started stronger, pressing Services on the ball and forcing errors in midfield. In the 5th minute, Ngulgoulal Singsit overhit a pass towards Thiyam Chingkheinganba’s run on the left channel inside the box. Despite losing the ball though, Manipur refused to give up on it inside the box, Lunminlen Haokip forcing an error from the Services defence and then laying the ball perfectly in the path of an onrushing N Jenish Singh, who hit it first time into the top far corner of goal. Bhabindra Malla Thakuri had no chance, and Manipur had the lead. 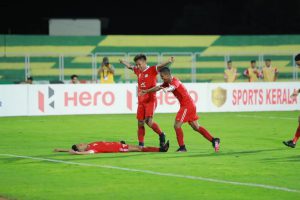 From there, Services slowly grew into the game, holding possession better, using the flanks and creating more in the final third. Pintu Mahata was at the centre of most of it, teeing up the flanks for the Services wingers to drill into the box. Too often though, the chances were astray. Manipur were content to play on the counter, comfortable in the knowledge they had the lead and enough firepower to trouble their opponents when needed.

Services’ best opportunity came right before the half hour as Mahata chased and won a long hopeful ball from the back by B Sunil. His cross was met by Ronaldo Singh, who dummied his way past the first defender before letting fly a weak shot, off target, that was nonetheless parried to safety by Md Abujar in Manipur’s goal.

As the teams went into the break, Manipur led by a single goal, while Services, despite holding a majority of the possession, had managed no shots on target at all.

Gift Raikhan’s words at halftime were probably directed at Manipur’s forwards, asking them for more energy, and right from the restart his players delivered. They swarmed over Services to turn over possession quickly and forced errors at regular intervals. From a deep corner in the 50th minute, Lunminlen Haokip rose highest at the far post to rocket in a header and double their lead. Services were in shock, and soon it would get worse. Manipur held possession, and strangled them for space. 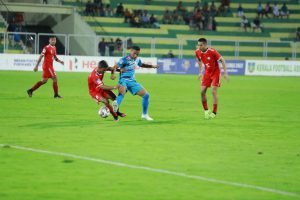 In the 75th came the third goal, Jenish Singh, hassling and winning the ball in midfield to release Thokchom Manichand Singh through on goal, with only the keeper to beat. Before Manichand could pull the trigger though, B Sunil poked his foot through, as the ball ended up in the bottom corner, an own goal that confirmed Manipur’s victory and sent Services back to the drawing board. The defending champions have been shocked and the tournament has been thrown open.