NEROCA and Army Red play out a goalless draw in Imphal 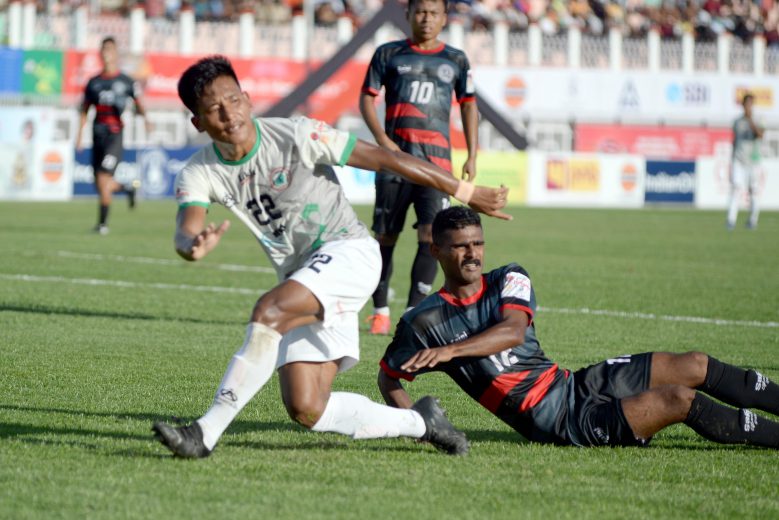 Imphal, Wednesday, August 24, 2022: Home side NEROCA FC was held to a goalless draw by the Army Red Football Team (ARFT) in a Group C encounter of the 131st IndianOil Durand Cup, here at the Khuman Lampak Stadium in the first game of Wednesday. NEROCA, who had won their first game against local ricals TRAU FC, were the more wasteful of the two while ARFT, who picked up a second consecutive draw, continued their good defensive work from their game against Chennaiyin FC. NEROCA as a result, now have four points from two games while ARFT has two from the same number of games.

The first half saw no intent from both teams, particularly in the middle of the park. The home side showed more eagerness, but could not create any meaningful chances in the ARFT half.

The Reds were compact and made it harder for NEROCA to create anything by defending deep. The Army men played well on the counters and did create few chances but were poor in the final third.

NEROCA up domination but fail to score

NEROCA started the second half brightly and started to create more chances. Lulminlal and Thomyo in particular, missed glorious opportunities to score for NEROCA.

At the hour mark, Lulminlal created a half-chance of shorts with great individual work, his diagonal run past two Army Red defenders creating the space to shoot, but he was off-target in the end

He was again at it four minutes later with a wonderful cross from the left wing, which took out the entire defence. Thomyo followed it and met it with a side-volley but he too lacked direction.

With three minutes left on the clock it was the Army team which got one final chance to break the deadlock when substitute Pradeep Kumar, unleashed a left-footed pile-driver from about 20 yards out but keeper Sonam Porei, rightly adjudged the Man of the Match, brought off a crucial save to deny the Army men.

Next matches of NEROCA and Army Red