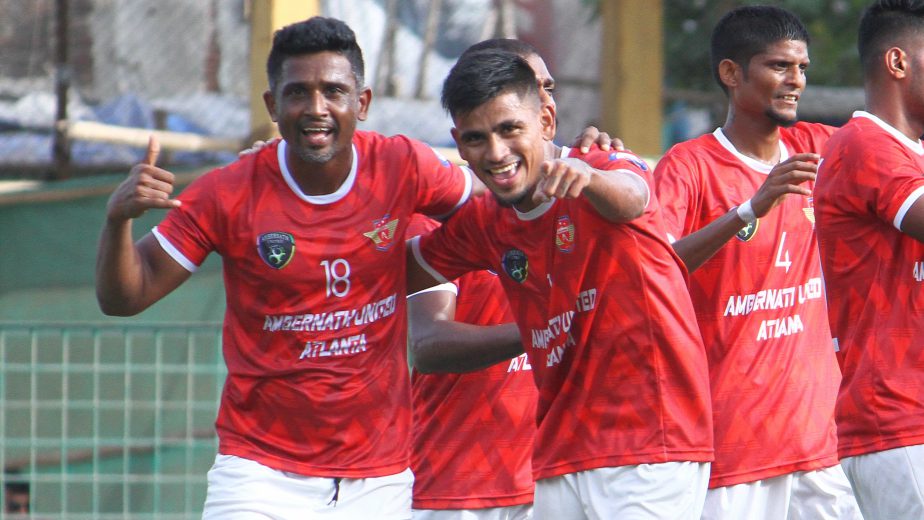 A highly physical encounter that saw 8 players getting booked including two sending offs by the end of the 90 minutes.

Ambernath United Atlanta FC started out brightly in their usual high line attacking game plan. In the 11th minute, a lower cross across the defence from Arif found Aaron whose first-time shot was blocked away, however, Alister Anthony was alert enough to pounce on the rebound and strike it past the keeper to register his 20th goal of the campaign.

India Rush grew into the game and they steadied their defense, managing AUA FC’s attack quite well while working out a few attacks of their own.

The first half ended with the Steven Dias-led side leading by a solitary goal margin.

The second half began in a similar fashion as Ambernath Utd Atlanta FC came out with a full-fledged attack.

In the 51st minute, Aaron’s cross from the right corner was headed across by Umesh Perambra into the path of Himanshu Patil who unleashed an impressive reverse kick to find the net as Ambernath Utd Atlanta FC doubled their lead.

With the game slipping away, India Rush upped their ante, as they began stitching a few attacks of their own.

They were duly rewarded when in the 59th minute, Abhishek Chakraborty’s strike beat the keeper to nestle into the net, reducing the lead to just 1 goal.

The game went back and forth on as both sides tried to attack, India Rush looked for equaliser while AUA FC looked to stretch their lead.

As the game headed for closure it turned physical, forcing the referee to bring out the cards. In the final minutes before the end of the play, Tingku Kangujam and Allan Dias were given their marching orders for an onfield altercation.

The game ended in favor of Ambernath United Atlanta FC as they extend their winning streak to 15 games.