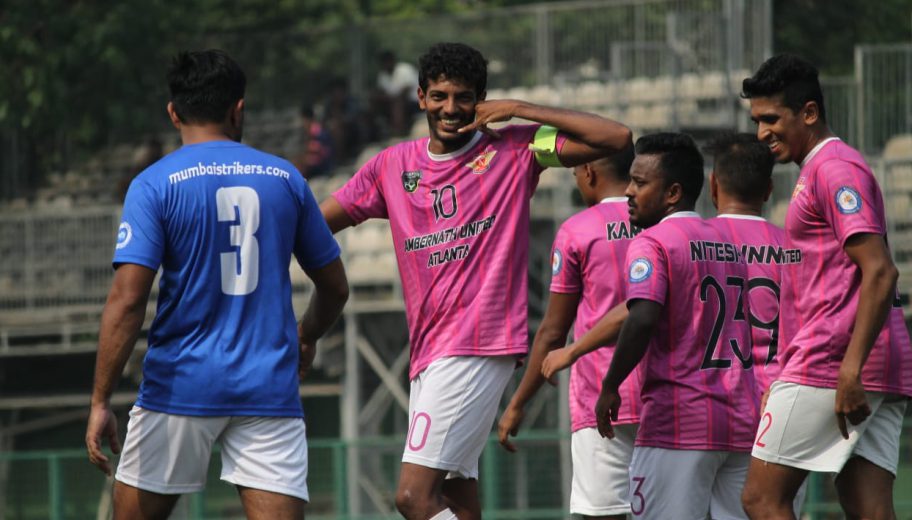 Another dominant display from Ambernath Utd – Atlanta FC as they pick up their eighth win in a row while Kenkre FC bounced back from a defeat with a huge 5-0 win.

Ambernath Utd – Atlanta FC continued their rampaging run in the MFA Elite League with another dominant display of football as they thrashed Mumbai Strikers SC 6-1.

The game began with AUA FC going in attack from the word go and it took them just three minutes to break the deadlock when a quick one-two between Aaron and Nitesh, the latter delivered a chipped cross for Allan Dias to head home.

Around the half-hour mark, Sunny Thakur dribbled past, couple of players before unleashing a shot past the keeper to open his scoring in the tournaments. A few minutes before the break, Sunny once again found himself inside the box as he doubled his tally with a clean shot to make it 3-0.

Post the break in the 56th minute, AUA FC continued their pressure and were rewarded with the fourth goal when Shravan Shetty’s brilliant cross was tapped home by Allan Dias. At the other end, Mumbai Strikers pulled one back through a shot from Rahul Johny that beat the keeper.

AUA FC continued their attacking intent and in the far end of the game, Shravan turned goalscorer when he beat his marker and dribbled past the keeper to slot home his first of the day. Two minutes later, AUA FC completed half a dozen of goals after Rohit KS headed home the final goal of the day as the game ended 6-1.

Meanwhile, in another game, Kenkre bounced back from their 2-0 defeat in the last game to beat the JMJ Sports club 5-0. After a frantic early part of the game, Kenkre took charge with three quick goals in the space of 6 minutes. Around the half-hour mark, Yogesh Kadam broke the deadlock before Rohit Jain added a couple of quick-fire goals to make it 3-0.

Midway through the second half, Akash Jadhav added a fourth of the day before Umang Surti made it 5-0 in the 82nd minute to put the game to bed.