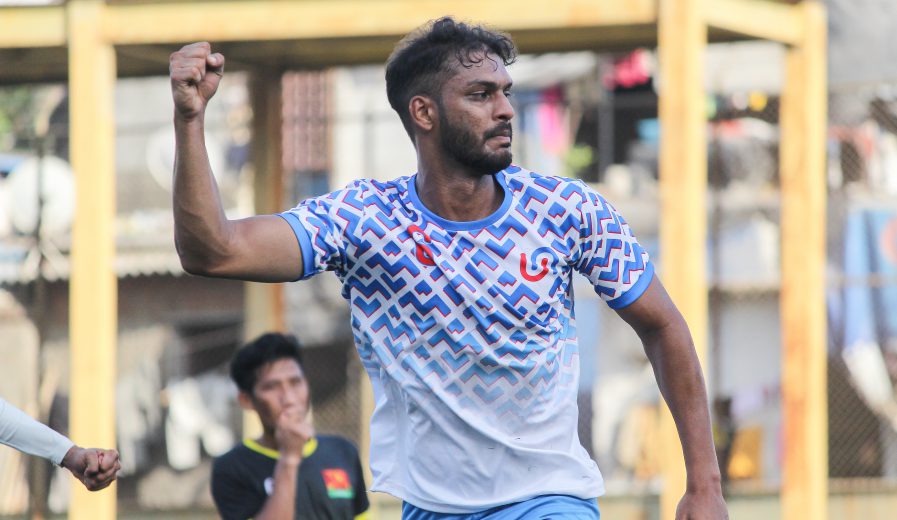 In a hard-fought MFA Elite (Corporate) League encounter, UBI came from a goal down to beat Century Rayon 3-2 to pick up all three points

In a highly entertaining 5 goal thriller, UBI’s Gaston D’silva and Martin Assisi combined well to give their side crucial three points as at the other end, Zingshopam Lungleng’s brace went in vain for Century Rayon.

After a decent opening quarter of the game, Century Rayon broke the deadlock when Zingshopam Lungleng picked a pass from the center of the field before making a run behind UBI defense and slotting home the opener. With a goal lead, Century Rayon looked in control of the game until around the half-hour mark when UBI won a free kick on the right flank. Gaston D’silva’s pinpoint cross was accurately met by Martin Assisi, whose header beat the keeper to put the scores on level terms.

A few minutes later, Gaston turned the scorer when he latched on to the ball on the right flank before beating his marker and unleashing a shot past the keeper to put UBI in the lead. Century Rayon increased the intensity in search of a quick comeback but UBI held on to the lead going into the break.

Both sides started out well on the restart, but it was UBI, who managed to find the net after taking advantage of another set-piece situation. Having won a free-kick on the left side of the field, UBI Striker Gaston delivered another pinpoint cross into the box, which was once again headed into the net by Martin Assisi as the latter completed his brace.

With a two-goal advantage, UBI looked well in command as they successfully repelled a barrage of Century Rayon attacks. However just as the game looked done as dusted, Century Rayon were offered a lifeline when they won a penalty in the 88th minute. Goalscorer Zingshopam Lungleng stepped up to take the spot-kick and made no mistake in beating the keeper to bring back the score 2-3.

In the final moments of the game, Century Rayon tried to find the equalizer by putting men forward in attack however they failed to beat the UBI defense as the referee blew the final whistle.