Kerala, Jamshedpur rack up convincing wins over Hyderabad and Mumbai 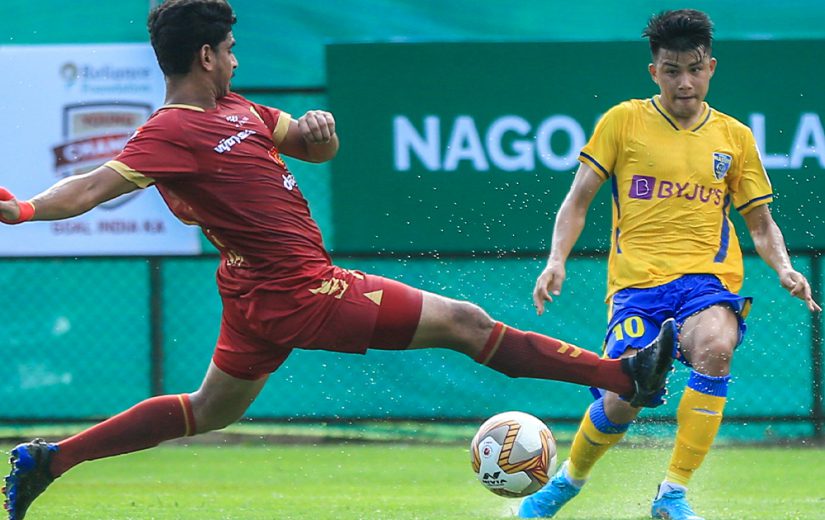 It was sweet redemption for Kerala Blasters FC’s reserve team less than a month after their heart-wrenching final defeat to Hyderabad FC in the Hero ISL, as the boys in yellow chalked up a 2-0 win over the same opponents in an RFDL tie here on Saturday.

In another game, Jamshedpur FC cantered to a 3-0 win over Mumbai City FC riding Piyush Thakuri’s brace on either side of halftime.

Vincy Barretto helped Kerala take the lead in the 17th minute before Hyderabad’s defender Singson put the ball in his net in the 36th minute.

As many as five players who featured prominently for Kerala in the ISL this season started the game with the promising Ayush Adhikari leading the side which boasted of players like Sanjeev Stalin, Givson Singh, Bijoy V besides Barretto in their ranks. Goalkeeper Sachin Suresh, who was also part of the ISL squad under Ivan Vukomanović, started in goal for the ‘home’ team.

Kerala were at it from the get-go, Givson curling a free-kick over the bar inside the first minute from the edge of the box. Hyderabad FC also had the likes of Abdul Rabeeh, Abdul Anjukandan, Amritpal Singh, and keeper Lalbiakhlua Jongte from the title-winning ISL squad, and Rabeeh looked in a fine form combining well with C Lalchungnunga.

But Kerala looked the sharper of the two with local boy Barretto, playing on the inside right channel initially with Mohammed Aimen up top, punching into the gaps behind the backline and keeping center-backs Amritpal and Singson on the tenterhooks.

It looked like a matter of time before Kerala would take the lead, and Barretto latched onto an opportunity soon, running in between two defenders after being set up by Stalin to then round the keeper and slot the ball into an empty net. Hyderabad slowly started stringing a few together, Rabeeh and Lalchungnunga trying hard to unlock the Kerala defense, but an error by Singson saw Hyderabad 0-2 down at halftime.

A cross from Givson saw Singson trying to clear the ball inside the area, but to his misfortune, it came off a colleague to cane off his foot and squirm into the net.

In the second half, Hyderabad gave a better account of themselves but lacked the cutting edge as Kerala bagged all three points.

Later in the day, Jamshedpur dominated proceedings against Mumbai in a lopsided encounter. Thakuri drew first blood, glancing a Keison Angelo corner into the back of the net in the 26th minute. Mumbai tried hard to break on the counter as the Red Miners bossed possession and showed more verve in the final third.

Just before halftime, Shreyas Vatekar turned sharply to get the better of Sandip Mandi but Jamshedpur keeper Mohit Dhami was alert to the danger. Mumbai also got a gilt-edged opportunity early on in the first half, Sarvesh Bangar dragging his effort inches wide of the target.

In the second half, it was all Jamshedpur as substitute Meitei toe-poked a Lalruatmawia cross into the net after a brilliant team move. Piyush then got on the card once again in the 89th minute, volleying home a Lalruatmawia cross to cap off a perfect night for the Indranil Chakraborty-coached side. The result saw Jamshedpur go top of the table after round one of the fixtures.

Also Read: Odisha Sports come back from behind to beat ARA FC