Mata Rukmani are still in search of their first win of the Hero IWL campaign and Head Coach Sandeep Singh is optimistic of a positive result.

He said, “It’s an important game for us as we want to climb up in the table. Last three matches have not gone according to the plan for us, we are working hard on rectifying our mistakes.”

Speaking about the opponents, Singh stated, “We are excited to be playing against the champions of Delhi & are looking forward to locking horns with them.” 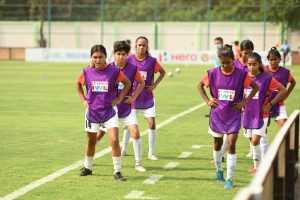 Hans Women FC, on the other end, are in a similar situation as their counterparts from Chhattisgarh, without a win in three matches.

Expressing his thoughts on the campaign so far, Head Coach Vikas Dubey quoted, “I have a squad of young players with very few experienced players; they are learning a lot from each and every single match. That’s what we are looking for. Each match will teach us a lot.”

He went on to add, “We’ll go with our strategy as we have planned in training. Also, we have worked on the areas where we were lacking.”