Mohammedan Sporting Club’s forward Marcus Joseph has been named the Hero I-League Player of the Month for March 2022 for his phenomenal performances as he scored 10 goals in 8 matches, and providing a solitary assist as well.

Overwhelmed with joy on receiving the award, the striker expressed, “I would like to say thank you very much for this award. My performance this season have been very good but there is still a long way to go and I am looking to improve even more. I am looking to go forward and continue to do a great job for my team.” 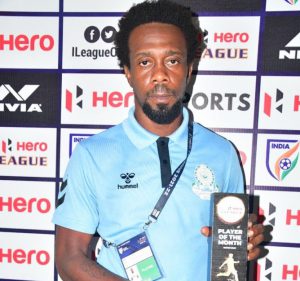 The striker has not only been a prolific goalscorer, but also a valuable creator for his teammates, creating 12 chances so far in the season,  putting him among the top 5 players for this metric in the tournament. He is also deadly in front of goal, with a conversion rate of 0.32 goals/shot, or scoring with nearly every third shot that he takes.

On being asked whether he thinks about scoring 20 goals this season, he responded, “Yes, for sure. I have confidence in myself. As I said before, there is still a long way to go in the tournament and I will be looking to score as many goals as I can and help The Black and White Brigade win the Hero I-League title.”

Mohammedan SC’s coach Andrey Chernyshov has helped the club win the Calcutta Football League after 40 long years and have achieved 22 points in the season from their nine matches so far in the Hero I-League. Conversing about the relationship with the gaffer, the Trinidad & Tobago international said, “I have a great connection with him. Sometimes we sit and discuss the game, and he has been teaching me to be a little more patient in front of the goal. Hopefully, I will be able to imbibe that in my game and improve myself.”

On being asked about winning the Hero I-League, Joseph explained, “The Calcutta Football league was a difficult league, and it was a great performance by the team. We are willing to give our best to win the Hero I-League title as well.” 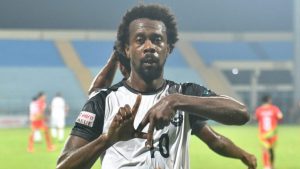 Apart from acting as the attack’s focal point, Marcus has formed some great partnerships on the pitch with the likes of Nikola Stojanovic, Andelo Rudovic, Faisal Ali and more. When asked about young players who have caught his eye in the league, he was quick to point out one of his teammates in Faisal Ali. “Yeah, there are a lot of great Indian players, I have seen so many talents, but I will say one from my team, which is Faisal Ali. He is a greatly talented player, and if he continues to stay focused and continue doing all the hard work he has been doing over the years, he will achieve great heights,” said Joseph.

The Mohammedan SC striker has had many memorable moments in the league. However, when asked to pick one, he was quick to echo the words of his coach and remember the first goal that he scored in the tournament. “My favorite moment of the season was the first goal I scored against Sudeva Delhi FC because winning the first game is crucial, and that has been my greatest moment in the Hero I-League,” he concluded.