Mohammedan SC head coach Andrey Chernyshov has been named the Hero I-League Coach of the Month for March 2022 after the Black and White Brigade ended the month at the summit of the table with six wins in eight games.

After ending Mohammedan’s title drought in the Calcutta Football League last year, Chernyshov set his sights on his side’s first-ever Hero I-League triumph. So far, it has gone according to plan as the Black and White Brigade are in first place, a point ahead of Gokulam Kerala FC.

“I am pleased to receive the Coach of the Month Award, but most importantly, our team are the league leaders and that’s the merit of the players. The team has gotten stronger with every game,” said a delighted Chernyshov. 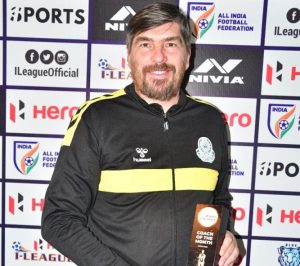 The Russian picked a few of his favourite matches of the season so far. “For me, the most important victory was the first one (2-1 against Sudeva Delhi in December). It was also important to win the game after the league restarted in March (2-0 against Aizawl).”

However, Chernyshov chose the high-octane 1-1 draw against title rivals Gokulam Kerala as Mohammedan’s best performance. “That game turned out to be the best one in terms of quality.” 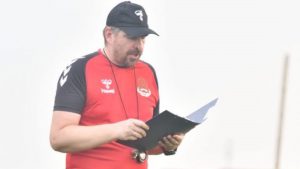 We’re heading towards the business end of the first stage of the Hero I-League and the race for the title is getting hotter with every gameweek. The top five teams,, i.e. Mohammedan SC, Gokulam Kerala, Sreenidi Deccan, RoundGlass Punjab and NEROCA are separated by just six points.

“The struggle for the championship will be very serious. I think 3-4 teams will fight for the title until the last game,” said Chernyshov. “Of course, we still have a lot of work to do and my players know it. They have to improve in every training session and in all aspects of the game,” he concluded.