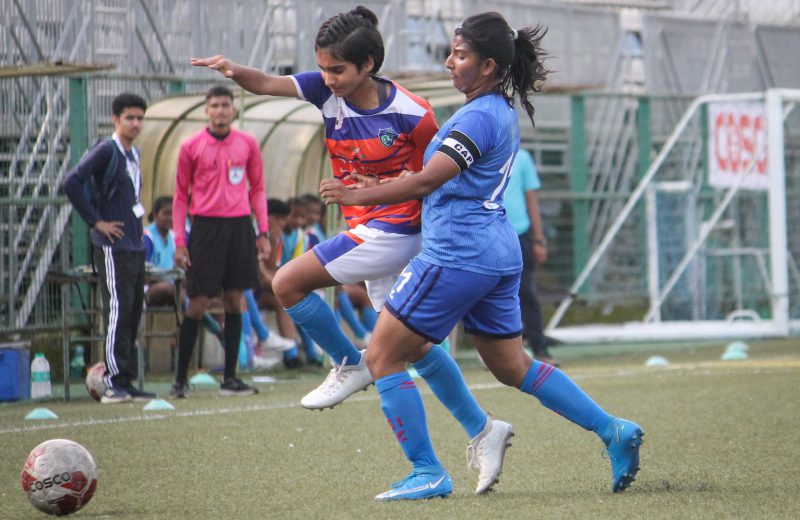 Striker Sanika Patil and midfielder Samrudhi Katkole both stuck impressive braces while Ritika Singh chipped in with one goal to complete an impressive 5-0 win over FSI – Navi Mumbai. The win takes Kolhapur to the second spot tied with league leaders on points but with goal difference separating the two.

Kolhapur started brightly, keeping possession and looking for an opening every now and then. At the other end, FSI kept their defensive shape well restricting their opponents to long-distance shots. Samrudhi then managed to beat the offside line to find herself in space unmarked but her final shot could not find the net as FSI Keeper Vedika Gurav pulled out a crucial save.

Samrudhi was not to be denied again as minutes later she dribbled past a defender before taking on the keeper and finishing it with a fine strike as Kolhapur finally managed to break the deadlock.

Three minutes later, Sanika managed to make a quick run for a lopping ball from the right side of the attack before chipping it over the onrushing keeper to make it 2-0.

In the second half, Kolhapur continued with their dominating game plan while FSI looked at damage control. Around the hour mark, both scorers Sanika and Samrudhi added one each to their tally in the space of three minutes as Kolhapur Warriors took a 4-0 lead.

With the last ten minutes of the game remaining, Ritika Singh made a surging run forward before finding the net with a fine shot to put the game to bed as Kolhapur took a 5-0 lead.