FC Goa fail to capitalize on chances, go down 1-0 to Jamshedpur FC 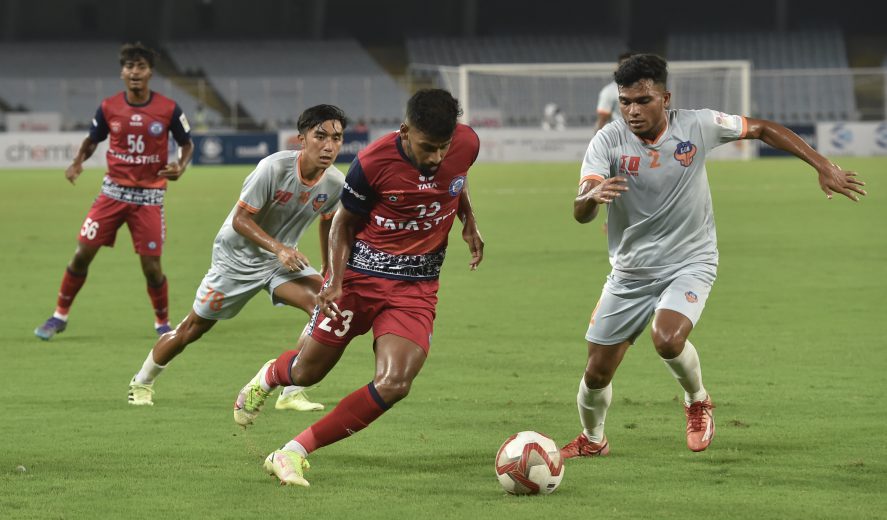 A late goal by Tapan Halder made all the difference as FC Goa went down fighting against Jamshedpur FC in their Durand Cup group stage clash on Friday.

The defeat has also diminished the Gaurs’ chances of qualifying for the knockout stages of the tournament.

While FC Goa head coach Deggie Cardozo rang in just one change from the starting XI that played against Indian Air Force last week, he also tweaked the side’s formation to 4-3-3 from the 4-2-3-1 that he has used so far in the tournament. While that improved the young Gaurs’ control over the midfield, a lack of creativity in the final third continued to dampen their goal-scoring hopes.

Unlike Mohammedan SC and Indian Air Force who failed to hold on to the ball for long, Carlos Santamarina’s side, who adopted a playing style similar to that of the Boys in Orange, did well on that front and were hence able to frustrate the young Gaurs at the start of proceedings.

Coming back after the break, Goa looked more composed.  Unfortunately for the young Gaurs,  it was their keeper Hrithik Tiwari who stole the show for Deggie Cardozo’s side.

After effecting two brilliant saves,  his biggest moment of the day came in the 73rd minute after the referee pointed to the spot after Lesly Rebello was adjudged to have fouled a Jamshedpur player in the box. With a spectacular dive to his right, Tiwari saved Vinil Poojary’s powerful penalty attempt.

FC Goa produced moments of their own in front of the Jamshedpur goal throughout the second period and could have taken the lead two minutes later, had Phrangki Buam been able to take his chance after being played in on goal by a delightful Md Nemil through ball. The forward fired straight at the goalkeeper in a 1-v-1 situation, and the Gaurs would go on to regret it soon afterward.

That was in the 84th minute when Tapan Halder gave Jamshedpur FC the vital breakthrough. The youngster received a cross from the left flank and squeezed his shot past Hrithik Tiwari to make it 1-0 for his team.

Halder’s strike also proved to be the final goalmouth action of the match, as Jamshedpur registered their maiden win of the ongoing Durand Cup campaign.

Both FC Goa and Jamshedpur FC are currently on three points from as many matches each in Group A. The Gaurs will play their final group stage match on August 30, against Bengaluru FC at the Vivekananda Yuba Bharati Krirangan (VYBK).