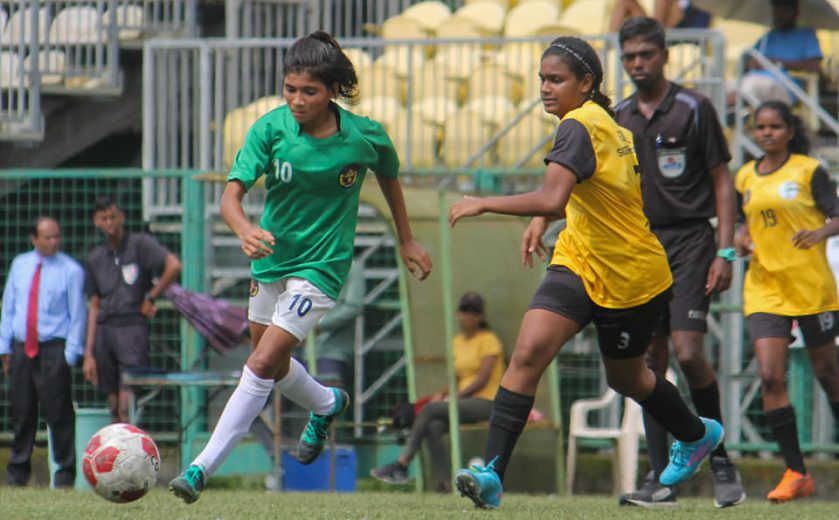 Saturday fixture between Warriors of Kolhapur SC and Lawless United ended in a one-sided affair with the former registering a comfortable 6-0 win.

Having lost their opening two games, Lawless united seemed to have started the game better against a strong Warriors of Kolhapur SC who were coming on the back of two consecutive wins. Having weathered the initial storm, Lawless defense finally succumbed to the Kolhapur attack around the half-hour mark. Sanika Patil opened the scoring before Arya More doubled the lead five minutes later. Samrudhi Katkole then added one more in the first half injury time as Kolhapur headed in to tunnel with a comfortable 3-0 lead.

In the second half, Tanvi Kore quick-fire double strike around the hour mark made it 5-0 before Samrudhi added one more to the tally to complete the half dozen of goals in the match.

Monday morning fixture between Kenkre FC and Footie First ended with Kenkre registering their first win of the campaign. A clinical game saw Kenkre take charge right from the start scoring three goals within the first 30 minutes of the game. Forward Ankush broke the deadlock in the 9th minute before Nishka Parkash doubled the lead. Ankush then slotted one past the keeper to make it 3-0 in the 27th minute as Kenkre took control.

Footie first soon managed to stabilize their defense as they managed to hold off their Kenkre attacks for quite some time. In the second half, Tanvi Patil then managed to add one more before skipper Harshika Jain converted a spot-kick to make it 5-0.

In the evening fixture, it was Puneri Warriors, who picked up their first victory with a 5-0 thrashing of lawless United. Playing their 2nd game in as many days, Lawless started poorly again as they conceded a penalty five minutes into the game after a foul inside the box. Priya Sukhdeve converted the spot kick to put Puneri in front.

Sakshi Yede then struck home the second goal of the game midway through the half to make it 2-0. With a comfortable lead in tandem, the game was slowed down as Lawless struggled to make a comeback into the game. In the second half, Divya Pachnge’s double strike made it 4-0 before Sharvari Donkar slotted one past the keeper in the dying moments to finish off the game.