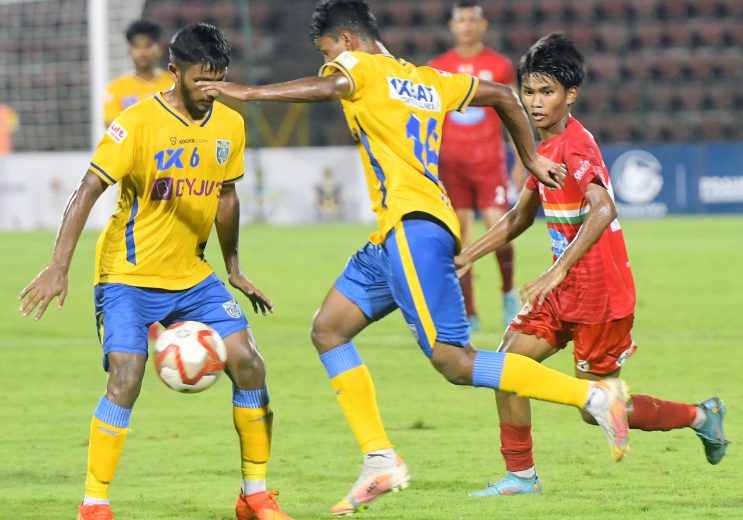 Guwahati, Friday, August 19, 2022: Delhi’s Sudeva FC played out a draw with Indian Super
League (ISL) side Kerala Blasters in a Group D game of the 131st IndianOil Durand Cup, at
the Indira Gandhi Athletic stadium in Guwahati. Md. Ajsal drew first blood for the Delhi NCR
based side, but a stunning strike from Mangku Kuki just three minutes later, ensured that both
teams split points in their respective opening game of Asia’s oldest tournament.

All 47 games of the 131st Durand Cup are being telecast LIVE on Sports18 1 SD & HD and
Sports18 Khel as well as live-steamed on the Over the Top (OTT) platform VOOT!

Sudeva coach Chencho Dorji made his attacking intentions clear from get go opting for a fourman midfield and a three-man forward line while the Blasters gaffer had no such illusions going
in with a regulation 4-4-2. Sudeva dominated possession in the first half and had the larger
share of attacks but could not press home the advantage.
It was then that the Blasters struck against the run of play with barely three minutes to go for
the first half to end.

Md. Ajsal received the ball in front of the box and drove in, shooting from near the penalty
spot area to beat keeper Kabir Kohli in the Sudeva goal.

The response was immediate. Mangku Kuki received the ball on the right from a quicky taken
throw-in in the attacking third, controlled and then cut in to gracefully curl it into the top corner
to draw parity. It was a top class finish at any level.

Sudeva continued to dominate possession in the second-half and created more chances but
there was a period when both teams sat back and wanted to control possession which might
have affected the end result.

The Delhi NCR side threw everyone forward in the final minutes of the game but beyond some
set-pieces, nothing fruitful materialized and the stalemate remained for the first draw of the
tournament after six games

Next matches of Sudeva FC and Kerala Blasters

The result makes Odhisa FC the team to chase in Group D after their 6-0 victory over North
East United FC (NEUFC) on August 17, 2022, and Kerala come back to the same venue to
face them on Tuesday, August 23rd, 2022, while Sudeva play Army Green next on August 25th, 2022, Odhisa play and afternoon game while Kerala will play an evening game.

The Airmen come back for their second game against a Sunil Chhetri led Bengaluru FC at the
same venue on August 23rd while their opponents today, have a week-long break, playing
Jamshedpur FC at the Vivekananda Yuba Bharati Krirangan (VYBK) on August 26, 2022.