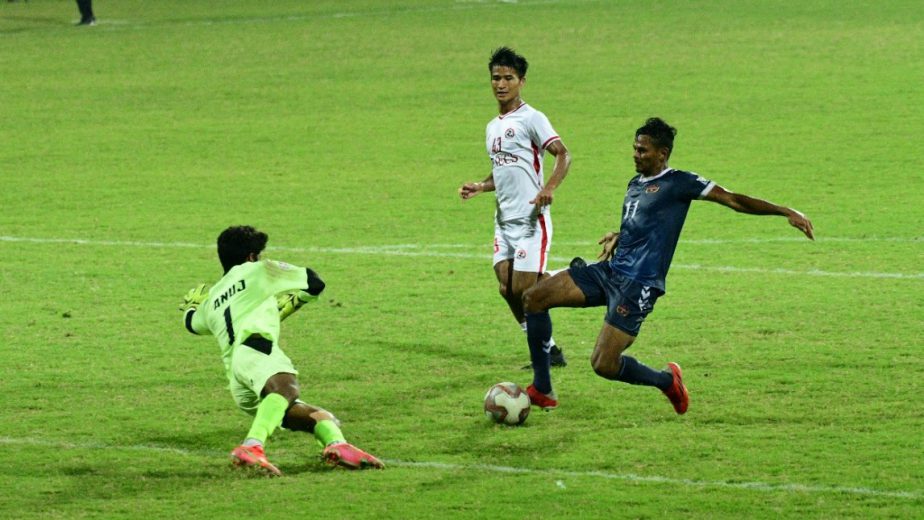 After not winning a single game in Phase I, Kenkre registered their second successive victory in Phase II against leaders Aizawl FC, here at the Kalyani Stadium. A first-half stoppage-time goal from Ranjeet Singh Pandre was enough for Kenkre to pip Aizawl and bag three crucial points with yet another clean sheet.

Aizawl FC started the game on the front foot, playing most of the half in the opposition half. The first real attack that had Kenkre keeper Padam Chettri worried was when a long ball from midfield was played to Willis Plaza. The attacker headed the ball down towards his strike partner Dipanda Dicka, who could not find his footing and skied the effort from an acute angle.

In this possession vs counter game, Samuel Lalmuanpuia was constantly whipping long balls into the box, from open play as well as free-kicks, for Dicka and Plaza. The strikers had a tough time getting their shots on goal.

Midway through the first half, Dicka put a great ball in for Plaza from the left flank. The Trinidadian took a touch, and sorted his feet out before firing it wide.

That effort came minutes after Aizawl keeper Anuj Kumar had denied Akeraj Martins a goal with a fantastic save. Martins’ glancing header was flying into the top left corner of the goal but Kumar at full stretch palmed it away to safety. Just before the final minute of the half, Aizawl lost defender Robert Primus Jr. to a hamstring injury.

Shortly after the departure of Primus Jr., in first half stoppage time, Kenkre broke on the counter again and ended up planting the ball in the net with only their second shot of the game. Skipper Kiran Pandhare played a beautiful through ball to Ranjeet Pandre, who beat defender Bakhtiyor Qalandarov, and slotted the ball past Anuj Kumar to give Kenkre the lead at half time.

In the final minute of first half stoppage time, Ramhlunchhunga picked out Dicka with his pass. The Cameroonian finally headed the ball on target but he was denied by Chettri who was at full stretch to deny Aizawl an equaliser late in the first half.

In the second half, Aizawl performed the way they did in the first half. In the initial minutes, there was constant attacking pressure from the side in white. Their focus on attack made them complacent at the back.

Defensive frailties were evident when two Kenkre attacks were halted at the last moment. Vijay Nagappan was at the heart of both attacks as he saw his effort blocked and then set up Pandre, who was denied bravely by Anuj Kumar right in front of goal.

Just past the hour mark, Dicka tried to play it in towards Plaza but it was well intercepted by Zacharie Mbenda. However, the short clearance landed at the feet of Ayush Chhetri who placed it wide.

Aizawl had another opportunity, this time from a free-kick near the box. Ramhlunchhunga struck it well and on target but Padam Chettri palmed it away for a corner.

Kenkre looked menacing on the counter throughout the second half. The side in blue were just unable to find the perfect final pass to finish the game off. Ten minutes from time, Nagappan smashed a beautiful ball across the face of goal but there were no Kenkre attackers in that position to simply tap it in for the winner.

Kenkre would have had a two goal cushion two minutes from time but second half substitute David Zate was in the right place at the right time. On the counter, Kenkre substitute Pravitto Raju played it in toward Pandre. The striker then slid the ball in towards Nagappan who was right in front of goal. But the final pass was amazingly intercepted by Zate.

Aizawl threw everything they had at Kenkre but could not score as Kenkre emerged victorious on a day where the teams at the bottom of the table have come off with all three points.

Despite losing the game, Aizawl retained top spot of the Relegation Playoff table, two points clear of four teams who are on thirteen points now. Kenkre remained at the bottom, still five points behind the thirteen-point train of four teams ahead of them.