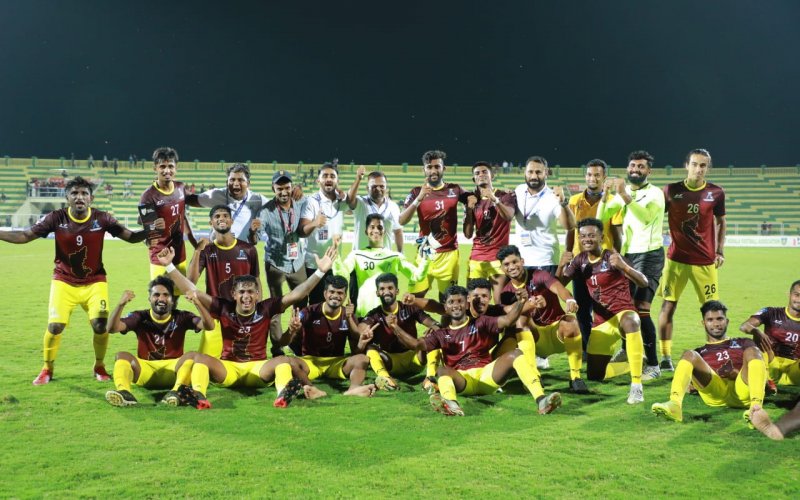 Karnataka capped off a dramatic final game in Group B to beat Gujarat 4-0 and qualify for the semi finals of the Hero 75th National Football Championship for Santosh Trophy at the Manjeri Payyanad Football Stadium here on Monday.

Services’ victory over Odisha earlier in the day had upset the comfortable apple cart that was this group. The math, leading into this final group stage game was simple. Karnataka needed to win by a three goal margin to go through.

For the first half an hour of the game, Gujarat were barely allowed to breathe. In the fourth minute of the game, even as the football hungry crowd was settling into the Manjeri Payyanad, Karnataka had their first crack at the goal, Sudheer Kotikela shooting wide from a tight angle.

Eight minutes later, they had the lead, Sudheer Kotikela picking up a brilliantly played through ball from midfield, driving into the box from the right, and unleashing a pefect finish into the bottom far corner. His team had the lead, but Kotikela realising the need for more, refused to celebrate, picking the ball up and urging his teammates towards the restart.

Wave upon wave of Karnataka attacks descended on the Gujarat goal, their defenders sliding, twisting, and heading balls away constantly. n the 19th minute, off a half cleared corner, Kotikela found himself with the ball at the edge of the box. The forward set himself up, opening his body, looking to curl the ball towards the top right corner. Unfortunately, he blazed high and wide. 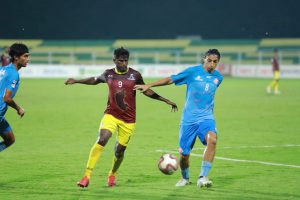 Gujarat offered some attacking vigour of their own, Anirudhsinh Thakor crosing superbly into the Karnataka box in the 23rd minute, the ball curling into a dangerous area yards from goal. If Jay Kanani had been a step faster it would’ve been the equaliser, but it wasn’t to be. Karnataka took it personally, and stepped up the ante.

In the 28th, P Kamalesh, a twinkle toed midfielder with flair unlike any other, collected a square pass from D Arun Kumar at the edge of the Gujarat area, switched feet, cutting past Harshil Parekh and Muhammed Sagar Ali as if they weren’t even there, before opening up his body and curling for the right corner of goal. His shot was perfect, and the finish glorious. Karnataka were two to the good.

Within minutes, they had their crucial third. Prashanth Kalinga ran into space on the right, and curled a superb cross into a dangerous area in Karnataka’s box. Despite being sandwiched by two defenders, Kotikela, five yards from goal, sent a first time finish into the net. His team were in rapture. And on a rampage. Suddenly, with just half an hour gone, Karnataka were dreaming of the semi finals.

They could’ve confirmed it in the first half itself, Kamalesh’s footwork causing the Gujarata defence all kinds of problems in dangerous areas. The teams went into halftime with Karnataka leading by three goals to nothing.

Gujarat came out for the second half with a little more urgency. Having had no shots on goal in the first half, completely overwhelmed by Karnataka’s play, they sought to play themselves into the tie. For the most part they succeeded, their wingers moving much better and producing better balls for Jay Kanani to have a go with. 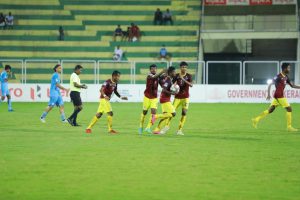 In the 52nd the youngster almost pulled one back, played through clean on goal, with only the goalkeeper to beat. A goal then would’ve turned the tie inside out and the group too. As it was though, S Siju was at hand, the defender putting in a hearoic tackle to take the ball off Kanani and save Karnataka the blushes.

Much like it had in the first half, the half chance spurred Karnataka into action, as they took control of the ball with more ferocity. Right on the hour mark, a cross from D Arun Kumar on the left, dropped the ball perfectly to Magesh Selva in the box. The forward didn’t miss, connecting neatly to put Karnataka in dreamland.

They stayed there for the remaining third of the game, controlling possesion brilliantly, creating chances and threatening to score more, all while keeping Gujarat at safe distance. At the referee’s final whistle it was jubilation, in the stands and on the pitch.