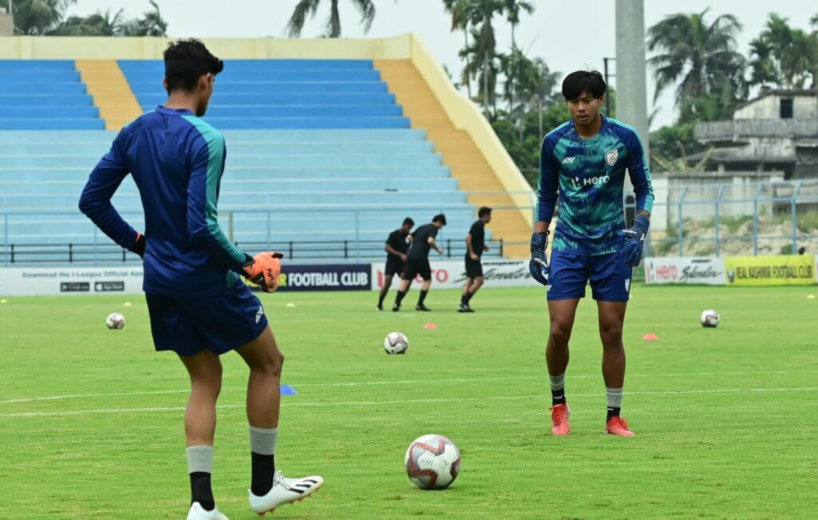 NEW DELHI: The next generation of Indian goalkeepers are going through rigorous tactical, physical, and mental development in the ongoing preparatory camp ahead of the SAFF U-20 Championship in Bhubaneswar which is scheduled to kick-off next week.

The four goalkeepers — Santosh Singh, Syed Zahid Hussain Bukhari, Mohit Singh Dhami, and Som Kumar are sweating it out to make it to the final squad for the tournament.

While all of them have been in the junior national team system for around four years now, the likes of Santosh and Zahid are a part of the majority of players, who have continued with this team after spending the last two seasons with the same group of players at Indian Arrows.

“The Arrows project has made a huge difference to the goalkeepers, especially from a mental aspect,” said goalkeeping coach Abhijit Mondal. “They have come with their respective skills. But to cope with playing at a higher level one needs to develop both physically and mentally. That’s something that they have done over the last two seasons at Arrows, and one can see the difference in their performance now,” Mondal added.

“They struggled in their first season in the Hero I-League. But in the last edition, they have been calmer and more mature. All of that comes with the experience of playing against quality senior opposition,” he continued.

“The best thing that they have learnt is not to be afraid of mistakes. As a goalkeeper, you can make a mistake in the first minute of a match, but you can’t let that affect you. You’ve got to produce those saves for the next 89 minutes.”

Meanwhile, the likes of Mohit and Som were a part of the India U-16 side under Bibiano Fernandes in 2020, and have now come through the system to the U-20s. While Mohit currently plies his trade in Jamshedpur FC, where he was a part of the senior squad that won the Hero ISL League Winners Shield, Som has been playing in the U-19 team of Slovenian side NK Kirk.

“Of course, Mohit and Som are both talented goalkeepers, and though they were not with us at the Arrows we had to go through a process once they joined us in the India U-20 camp,” said Mondal. “Fitness levels were the first thing that were checked, and then we could move straight on the tactical training.”

“Our main aim with all four of them is to build goalkeepers that play smart in terms of positioning, and can keep the ball at their feet with a calm head on their shoulders. That’s why we concentrate on drills with the ball at the feet for at least the first 20 minutes of every training session,” he said. “We want them to look at long balls as only a means to bail them out of difficult situations, and that’s all.”