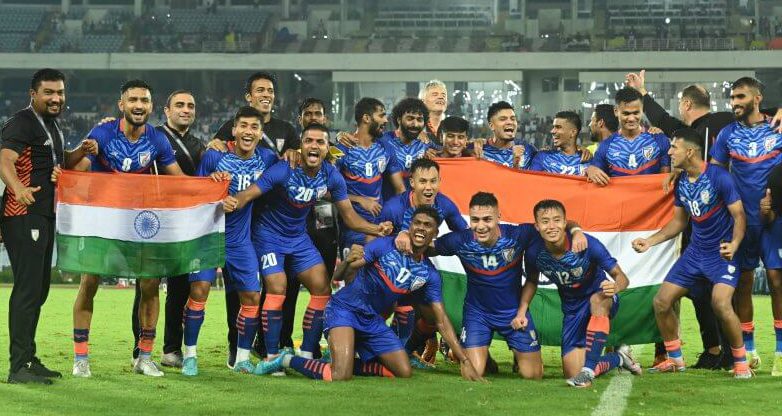 India completed their AFC Asian Cup Qualifiers 2023 campaign in style at the VYBK Stadium in Kolkata as they bagged a massive 4-0 win over Hong Kong in the final game of Group D. Anwar Ali, Sunil Chhetri, Manvir Singh and Ishan Pandita were the goalscorers for the Blue Tigers.

India started the match on the front foot just as they did against Afghanistan and they were duly rewarded for their efforts. They were awarded a corner in the 2nd minute of the game and they took full advantage of the set-piece. The ball was swung in and after some pinball stuff, the ball fell to Anwar Ali who smashed the ball into the back of the net for his first international goal and one of the most crucial ones for India.

Hong Kong responded by pressing high up the pitch after that and it was India who kept things at bay. Suresh Singh Wangjam was booked for a rough tackle by the referee in the 9th minute. Things started to settle down a bit after that, but both teams were trying to create chances, with Hong Kong pressing for the equaliser and India trying to hit them on the counter-attack.

The Blue Tigers went for another counter-attack in the 23rd minute but Ashique was brought down cynically near the halfway mark and Hong Kong skipper Sean Kea Keung was booked for the challenge. In the 27th minute, Sahal had a chance to double India’s lead when Chhetri’s effort was saved by the keeper but Sahal’s shot went just over the bar.

With Hong Kong ramping up the pressure, it was becoming difficult for India to keep the visitors out. In the 38th minute, a cross came in from Sun Ming Him but it was cleared bravely by Akash Mishra at the far post. In the 40th minute though, Hong Kong came the closest when Akash Mishra was beaten down the right flank, a cross was put in but with ample space in the box for Matt Orr, his header was way over the bar and India survived another scare.

However, just before the half-time break, the Blue Tigers doubled the lead and scored the insurance goal which was so desperately needed. India had a free-kick about 35 yards away from goal. Jeakson Singh looped in the ball from the free-kick at the far post for Chhetri. The Indian skipper found himself unmarked in the box. He took a beautiful touch with his right foot to set himself up and then dispatched the ball into the back of the net for his 4th goal of the AFC Asian Cup Qualifiers.

Hong Kong kept coming at India throughout the match and came very close in the 57th minute when a cross from the right clipped the boot of Akash Mishra and hit the top of the crossbar before going out for a corner. At the hour mark, Igor Stimac made a couple of changes as he brought on Manvir Singh and Liston Colaco while Udanta Singh and Sahal Abdul Samad went off.

With India in a comfortable position, they were happy to concede position, soak up pressure and hit Hong Kong on the counter. With the clock ticking away, Hong Kong became more and more desperate for a goal but that only resulted in them cheaply giving away possession and India as a result gaining more control of the match. In the 76th minute, Igor Stimac brought off Sunil Chhetri and Brandon Fernandes came on. Another substitution was made in the 80th minute as Ishan Pandita came on for Ashique Kuruniyan.

With the result almost wrapped up in the final few minutes of the game, Manvir Singh also put his name on the scoresheet in the 85th minute. Brandon Fernandes played a beautiful one-two down the right flank and found Manvir Singh with a cut back who then put the ball away brilliantly with a low shot. Hong Kong tried to ruin the mood of the Indian defence in the 87th minute when Kwan Philip found himself alone in the box but he failed to trouble Gurpreet Singh Sandhu.

In stoppage time, Ishan Pandita put the icing on the cake with a beautiful and cheeky goal. This time Manvir Singh became the provider as he put in a low cross from the right flank. Ishan Pandita got inside the six-yard box and with a defender closing down on him, Ishan cheekily backheeled the ball into the far corner and made it 4-0 in favour of the Blue Tigers.