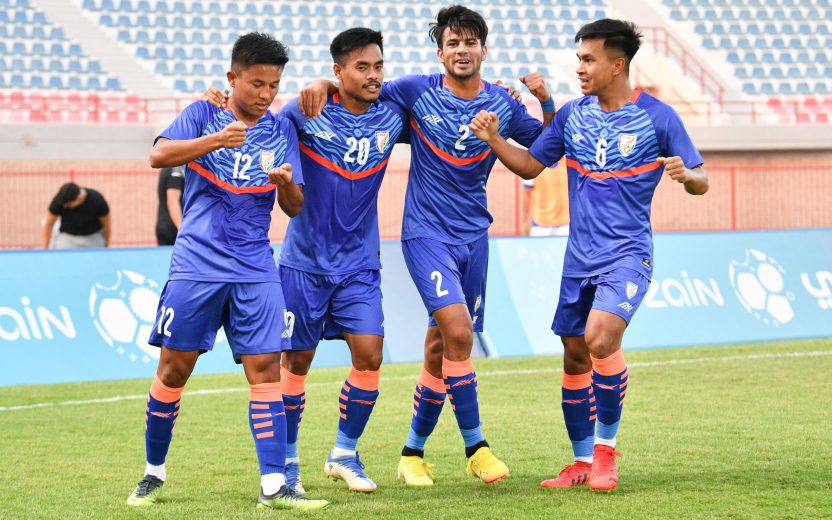 KUWAIT CITY, KUWAIT: Fullbacks, or sidebacks are a rare breed in modern day football. They are considered defenders, yet they must attack. They need both creativity, and the ability to tackle. They require to be explosive on certain occasions, and yet be calm and collective on others.

The India U-20 Men’s National Team has two such fullbacks who have impressed one and all with their performances for the age group National Teams – Amandeep and Taison Singh. Both have earned plaudits from head coach Shanmugam Venkatesh, opposition players, coaches, and even referees for their performances on the pitch at the AFC U-20 Asian Cup Qualifiers.

“The matches have been played at a very high intensity, and we have had to fight every step of the way,” said Loitongbam Taison Singh, who has operated in the dual roles of right wing, as well as right wing back for the team over the years. “We would have liked to have better, more positive results, but luck did not favour us in crucial moments of both the matches. At any rate, we can go out with our heads held high.”

Left back Amandeep is one who has been playing in his position over the last four years, but he has adapted to other positions as well.

“I just want to be there on the pitch, and I’m ready to do whatever it takes to play. I’ve played on the wing, defensive midfield, centre-back – all I want to do is play,” he said.

Curiously enough, both Taison and Amandeep have had to make major adjustments to their games over the past years. While both started out as predominantly right-footed players, severe knee injuries meant that they had to sit out for a long time; something that did not sit well with either player.

It was during their Subroto Cup days in 2017 with Chandigarh Football Academy that both Taison and Amandeep suffered knee injuries, and after missing a few games, both the youngsters, with the consultation of their physios and coaches, decided to take to their left feet and continue playing.

“It was so difficult that that time. My left foot was okay, but when I started using it as my main weapon, things were just going haywire. Coach se bahut gaali khata tha (the coach used to scold us at every turn),” laughed Amandeep. “But we really put our heads down and worked on our left foot so much that now our left feet are better than our right.”

It was not long before the duo impressed in a practice match against the India U-16 team, where Bibiano Fernandes immediately spotted them and immediately brought them into the national team fold.

“At that time, that team had already played a few matches, and they had a set playing eleven. But they tried us out in a few matches and very soon we became regular starting XI players. And we loved to keep it that way,” said Taison.

Progression with the national team

While both Taison and Amandeep have been in the national team fold for around four years now, the two have known each other from their academy days.

“In fact, we had almost got into a fight over which channel to watch, when we were both new at the Chandigarh Football Academy. Thankfully, for me, it didn’t come to blows, as Taison had also been trained in boxing a few years before,” laughed Amandeep.

“But in all seriousness, we have become very good friends over the years, and have helped each other get better in the National Team. We have played so many matches together for both our Academies and for India,” Amandeep quipped. “And it’s often just instinct for me to look for Taison with a long diagonal ball on the pitch – if I have some space, and I’m breaking on the counter-attack, I know that Taison will also be making that run. We have developed that understanding.”

The National Team has also been a place where the duo has learnt the art of playing in their respective positions, as well as operating in other roles as well.

“I started as a central midfielder, and then was shifted to right wing. I’ve played right back, left back, and defensive midfield as well. The advantage of learning so many roles is that when you get back to your original postion, you know what your teammates around you are also about to do. That helps the team chemistry,” said Taison.

“These last four years in the national team age groups have been a huge learning curve for us. Right from discipline to diet, to tactical awareness, we have learnt it all under coaches like Bibiano Fernandes and Venkatsh Shanmugam. I am really thankful for such an experience.”

With one match remaining for the AFC U-20 Asian Cup Qualifiers against Kuwait, these two Blue Colts will be looking to put in another shift, as India attempt to close their campaign with a win against the hosts.