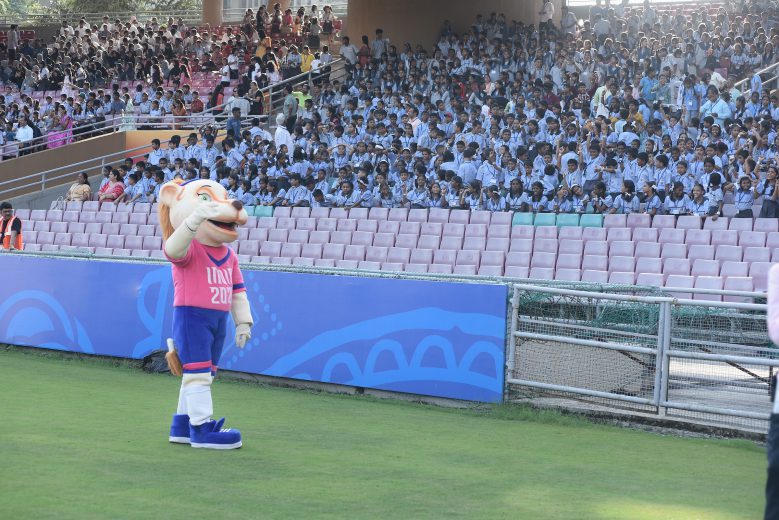 In the opening week of the FIFA U-17 Women’s World Cup India 2022™, the tournament has already attracted a lot of warmth from football fans in the country.

The presence of a special set of fans seen consistently cheering from the stands – young boys and girls – has been facilitated by a special community engagement initiative undertaken jointly by the tournament’s Local Organising Committee and FIFA. Thousands of young children across the three venues have enjoyed some world-class footballing action, and many more will get a chance to do the same in the coming days.

For Jaime Yarza, Director of Tournaments, FIFA, the sight of the children having fun in Navi Mumbai’s DY Patil Stadium are a stand-out moment. “The matches where the kids are dancing, celebrating, and laughing created the ‘pictures of the day’ for me,” he said.

The joy of watching the tournament take-off is even sweeter for him because of the uncertainty that surrounded its fate due to the pandemic. “It was a hard time for a lot of people, especially for those who were here for the FIFA U-17 World Cup in 2017,” continued Yarza. “Having experienced the passion that we did back then, it was hard to be unsure if it (the 2022 tournament) could happen in India. So, now seeing the games being played, it’s a real pleasure for all of us.”

Yarza also shed light on the genesis of the initiative that has made it possible for the kids to witness some enthralling football action. “Three months ago, I was here for a meeting with the Union Minister of Youth Affairs and Sports, Anurag Thakur. I told him that I want to give back to the community by bringing kids to the matches and giving them a great experience. He was completely aligned with us on the idea and called the sports ministers of the respective states to ensure that the kids are invited to the stadiums,” he informed.

Nandini Arora, who is one of the Project Directors of the tournament, also spoke about the initiative. She said, “Through this tournament, we want to promote the ideas of equality and inclusion. We want these boys and girls to come and see how well these young women can play.”

With consensus firmly established on the vision, the Community Engagement team of the LOC got in touch with the education ministries of the host states and a plan was laid out. “A section of each stadium has been reserved for the school kids. Around 3000 of them watched the first match in Bhubaneswar while in Navi Mumbai, 5000-6000 were in attendance. The number is going to go up during the final,” Arora informed.

Special arrangements have also been made in the stadium to ensure that the young fans of the sport enjoy the experience of coming to a game thoroughly.

A number of people have been working behind the scenes to make this initiative a success. “We must thank the local Municipal bodies in each of the host cities, the police and the teachers accompanying these children for helping us pull off this wonderful initiative, that in total will see close to 120,000 kids get to watch a match from a stadium,” said Arora.

To see these young visitors return home happy after experiencing a match of football is one of the legacies that Yarza hopes for from this tournament. “The other legacy that this tournament should leave behind is the empowerment of these girls who, hopefully inspired by the players, should feel that they too can go out and achieve what these players are able to,” Yarza added.

The two fixtures today (Monday 17 October) involving Nigeria and China, as well as the host nation and Brazil, will be the last two matches of the tournament at Bhubaneswar’s Kalinga Stadium. The remaining matches will be hosted by the other two venues — Goa and Navi Mumbai, with the final scheduled for 30 October.

India go down to Australia 1-4 in AFC U-20 Asian Cup Qualifiers
Improvise, adapt, overcome: The story of India U-20 boys Amandeep & Taison Singh