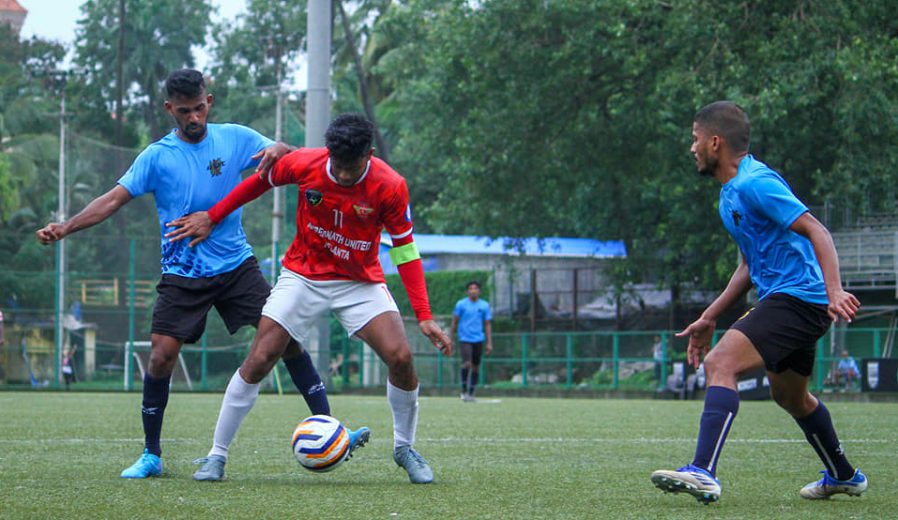 The win keeps the Steven Dias-managed side’s Harwood league race firmly in their own grasp with just a point needed in the final league game of the competition to lift the title.

After Bank of Baroda suffered an upset loss in the previous game, Ambernath United Atlanta FC were given a run for their money too with Himanshu Patil’s injury-time goal giving the side a late win.

Income tax started brightly, pressing up the field from early in the game unsettling their opponent. However, neither side managed to create a concrete opening in the game. The first chance came to Ambernath UTD Atlanta when Nitesh’s cross into the far post was headed over the bar by Umesh Perambra. A few minutes later, Shravan Shetty sent in another delicious cross across the IT defense but a diving Nishant Shetty header went whiskers over the bar as the score remained 0-0.

At the other end, IT came close with Craig Dsouza’s powerful goal-bound free-kick that was cleared away by an alert Bipin Rawat in defense. Around the hour mark, Himanshu had a free-kick chance just outside the box. His shot went across the wall but could not beat an alert Income Tax goalkeeper.

Income Tax went closest to goal in the dying minutes of the half when Mrunal Tandel did well to send in a brilliantly weighted cross for an unmarked Craig on the wings, who ran in with the ball before sending in a low cross for Sandesh Gadkari in the box. However, the IT striker’s first-time shot was wayward as both sides soon entered the break with a deadlock yet to be broken

In the second half, IT started positively winning a free-kick early on, Troy D’souza’s long cross into the box found Sandesh at the edge but his header although on target lacked the power as Manoj Gupta easily lapped it up in his hands. Few minutes later, Himanshu won the ball in the middle of the park before laying it off for Sunny Thakur who drove deep into the box before unleashing a shot over the bar from a close angle.

Around the hour mark, Nitesh sent across a long ball over the IT defense that was brilliantly trapped by Himanshu Patil before laying it off for an onrushing Alister who failed to test the keeper from an open position.

Income tax then went close to scoring when Mrunal won the ball in the middle before passing it to Sandesh at the edge of the box. The striker under pressure from the defender back-heeled it for Merwin, who was unable to keep his shot down.

As the game headed into the final ten minutes, Income Tax almost took the lead when a corner routine was cleared only as far as unmarked Craig just outside the box. Craig took a touch before unleashing a powerful shot that was headed towards the top right corner only for an alert Vijith Shetty to head it over the bar denying them a goal.

In the final minutes of the game, Substitute Tanay Talgoakar did well to beat his marker on the wings, dribble past the Income Tax defender into box before sending in a low cross for an unmarked Himanshu Patil who tapped it in to cap off a brilliant move.

The late goal meant Ambernath United Atlanta FC end the game with a 1-0 win and 12 points from 4 games with just a point needed to confirm the title.

The final league game of the competition has now turned out to be a virtual final between Bank of Baroda and Ambernath United Atlanta FC. While the latter just need a point, the Bankers come into the final league game with a clear shot at the title needing an outright victory against their opponent.