Gokulam Kerala rout NEROCA to extend lead at the top 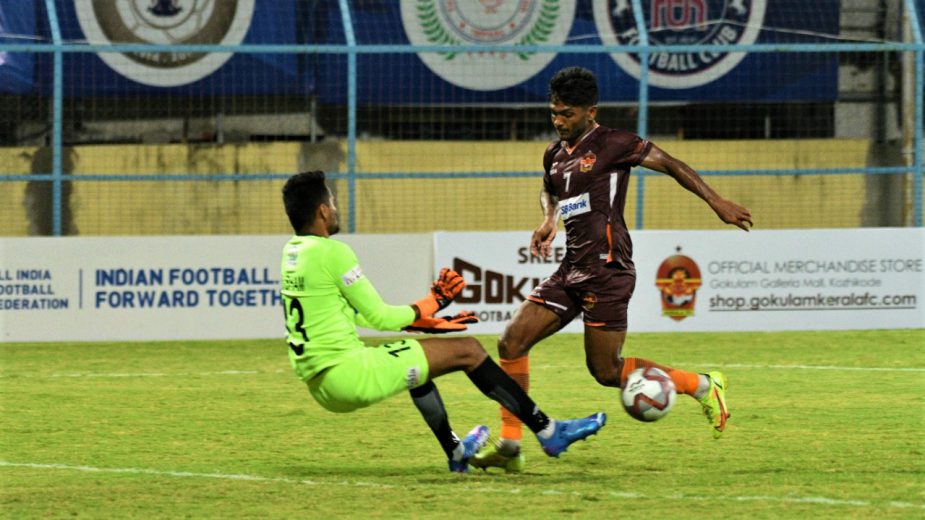 Top met bottom as the first half got off to a very bright start. Gokulam Kerala were favourites for an easy win but NEROCA FC had other plans and matched Gokulam’s desire to win. The league leaders were dealt an unfortunate injury blow as Ahmed Razeek limped off the pitch and was replaced by Sreekuttan VS inside the opening 20 minutes.

The concern did not last for a long time as Gokulam took the lead three minutes after the forced substitution. Skipper Sharif Mohammad did well in midfield and managed to play the ball to Emil Benny. A diagonal ball from Benny was meant to reach the left flank but was intercepted by NEROCA defender Abdul Salam. However, Salam’s header, intended to go towards his goalkeeper, landed perfectly for Thahir Zaman, who beat Shubham Dhas to the ball, and slotted home the opener.

Just a minute later, Gokulam came close to doubling their advantage as Sreekuttan whipped a powerful cross in from the right. Jourdaine Fletcher received it but could not control it as it came off his calf and went out for a goal-kick.

On the counter, Sergio Mendi played a delightful flick towards Davis Kamanga following which the Zimbabwean was brought down unfairly by Sharif Mohammad near the edge of the box. From the resulting freekick, Mendi tested Rakshit Dagar as the Spaniard unleashed a powerful low shot away from the wall, towards the keeper’s side. Dagar went down quickly to palm the ball away to safety.

Minutes later, Sweden Fernandes also tried his luck from range but his effort lacked power and was saved as NEROCA finished the half with more shots than Gokulam but still trailed by a goal.

Minutes into the second half, Gokulam bagged their second of the evening as Zaman bagged his second of the game. Benny was at it again as he found Fletcher unmarked on the left flank. The Jamaican played an inch-perfect cross into the path of Zaman, who carefully tapped it in with his first touch.

Before NEROCA could catch a break, Gokulam struck again, this time after being given the opportunity to score an easy goal. A back-pass from Lallenmang Sitlhou came to Dhas. The NEROCA keeper was complacent on the ball as Fletcher pounced on it before Dhas could clear. Ultimately, the ball was buried in the back of the net by Fletcher who was vigilant inside NEROCA’s defensive third to make it three.

Zaman was hungry for a hat-trick and came close to bagging one when Sreekuttan played it in. Before Zaman could pounce, the pass was intercepted and cleared.

Thirteen minutes from time, Gokulam almost replicated the move that led to the second goal. Fletcher whipped the ball in from the left, again, towards Zaman. However, this time Dhas was alert and did well to block the ball well before it could reach Zaman.

A minute before ninety, Gokulam substitute Zodingliana rattled the crossbar from the edge of the box. The effort was on target but it was put onto the bar by a faint touch from Dhas.

Gokulam did get their fourth, deep into second-half stoppage time. Sreekuttan, who had played a fantastic game after coming on in the first half, got his name on the scoresheet after turning Sitlhou inside out and then slotting the ball in at the near-post.

Another game and another victory for Gokulam Kerala saw them go six points clear of Mohammedan SC, at the top of the table with one hand already on the trophy. NEROCA FC, on the other hand have now extended their winless run to seven games and will stay at the bottom of the table, three points behind Rajasthan United.