Churchill Brothers edge past RoundGlass Punjab to move into top 3 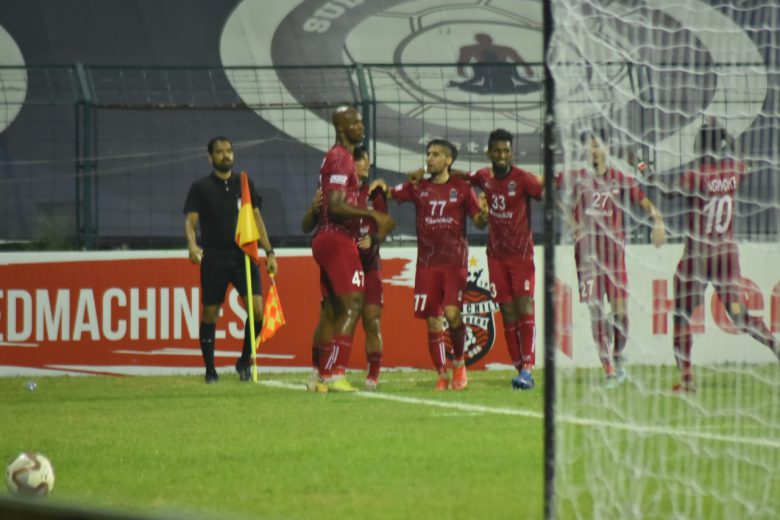 Churchill Brothers FC Goa defeated RoundGlass Punjab 2-1 in the Hero I-League on Tuesday, here, at the Kalyani Stadium. With this win, they have moved into the top 3 on the table. They are now just seven points behind top-placed Gokulam Kerala. Bryce Miranda and Gnohere Krizo were on the target for Churchill Brothers while Kurtis Owen Guthrie netted the lone goal for his team.

Churchill Brothers and RoundGlass Punjab enjoy dominating the midfield, and it was no different in this encounter. Both teams came out firing early on, looking to take control of the game by gaining possession of the ball.

Churchill Brothers’ most significant opportunity came as early as the fourth minute when Bryce Miranda set up Komron Tursunov with a cross from the left side. However, the Tajikistani attacker did not make a good connection with the ball and squandered a clear chance. Churchill created another opportunity two minutes later when Miranda attempted a shot from close range, but it went wide.

RoundGlass Punjab also had several chances in the first 15 minutes of the game, including winning a free-kick and nearly converting it in the 12th minute, but Shilton Paul stood tall to deny their rivals any early lead.

Tursunov was gifted another chance to smash the ball into the net in the 19th minute but he was not able to deceive Jaspreet Singh after being set up by Ikechukwu Kenneth Ngwoke.

Miranda ultimately broke the deadlock by scoring the game’s opening goal in the 25th minute. He found the back of the net by nutmegging the rival goalkeeper after being set by Kingslee Fernandes via a brilliant chipped through ball from midfield.

After conceding the first goal, RoundGlass Punjab picked up the pace as they looked to counterattack more in pursuit of an equalizer. They were awarded a free kick in the 35th minute but it did not materialize into anything. Travis Paul Major found the back of the net for RoundGlass Punjab in the 37th minute but the goal was ruled out for offside.

Freddy Lallawmawma had a chance to tie the game in the 43rd minute, but he lost his balance when connecting with the ball, and his shot went wide.

During first-half stoppage time, Miranda sought to create a wonderful opportunity for his side from the left wing, but his effort was cleared from the six-yard box thanks to a brilliant block by Josef Charles Yarney.

Much like the first half, Churchill Brothers began the second half on the front foot as they looked to double their lead. Meanwhile, RoundGlass looked to alter their strategy as they named the first round of substitution in the 46th minute with Robin Singh replacing Ashish Jha on the field.

Churchill Brothers won a corner in the 50th minute and with that came another opportunity. Miranda took the shot and found Momo Cisse with a good pass but his header went wide.

Kurtis Owen Guthrie finally scored the equalizer for his side in the 55th minute. Robin Singh provided the assist as Guthrie notched up his 13th goal of the 2021-22 I-League campaign, equalling joint-top scorers Marcus Joseph and Luka Majcen in the race for the golden boot.

After blowing their advantage, the Churchill Brothers players appeared upset, and it showed in their performance. RoundGlass Punjab took advantage of this by ramping up their offensive efforts, with Robin Singh and Guthrie tearing apart the opposition team’s defence.

Cisse almost put his team ahead again with a free-kick in the 72nd minute, but a world-class save from Jaspreet Sigh denied him a well-deserved goal.

Churchill and RoundGlass increased their attack during the fourth quarter of the game in search of a winner with both sides creating several opportunities.

Finally, Gnohere Krizo scored a late goal in the 85th minute to put his team ahead. Despite the fact that Krizo slammed the ball into the net, it was Saurav Mandal who put in the most effort as he sprinted down the right side with the ball and outplayed several RoundGlass players before passing it to Krizo.

The Punjab players were hyperactive on the field in the final 10 minutes of the game, searching for an equaliser that never came. As a result of the loss, they have dropped to fourth place on the standings.