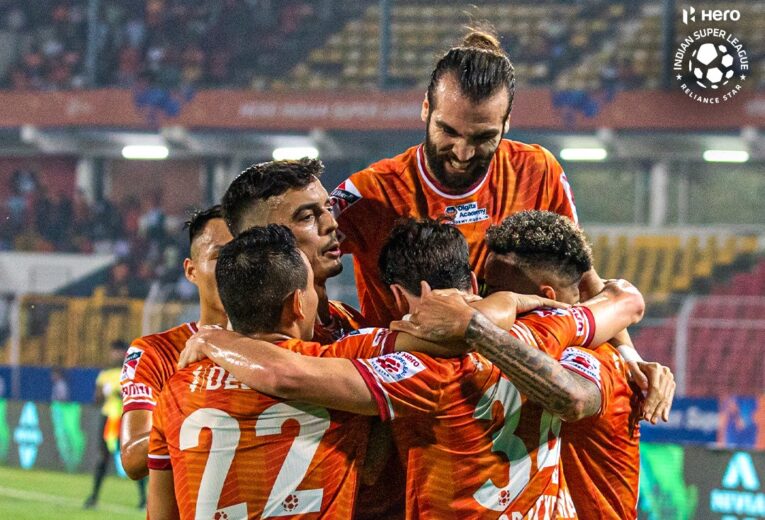 FC Goa climbed to fifth place in the Hero Indian Super League (ISL) after a 2-1 win over NorthEast United FC at the Jawaharlal Nehru Stadium in Goa on Saturday.

Vincenzo Annese was taking charge for the second time as NorthEast United FC head coach. He made five changes to the line-up that started in the 7-3 loss to Chennaiyin FC last week. NorthEast United FC weren’t as adventurous in their approach this time, but it made little difference to the outcome.

FC Goa got off to a great start, thanks to Noah Sadaoui and Edu Bedia. Bedia made a run into the box from midfield and placed his volley into the corner after some crafty work from Sadaoui on the left flank, who found him with a perfectly weighted cross in the 10th minute.

FC Goa went 2-0 up 10 minutes later. They were awarded a free-kick at the edge of the box after a foul on Sadaoui from NorthEast United FC Mirshad Michu. Sadaoui’s free-kick hit the wall, but a ricochet fell perfectly into the path of Iker Guarrotxena, who powered the ball into the net. FC Goa took the 2-0 lead into half-time.

The start to the second half was subdued. NorthEast United FC, who had ended the first half with some encouraging half-chances, were getting into the final third more often but not really troubling the FC Goa defence. FC Goa, on the other hand, were happy to string a lot of passes before waiting for an opening.

Noah Sadaoui, who had a great game, came very close to making it 3-0 to FC Goa in the 74th minute. He found space on the counter and got around the goalkeeper, but his scuffed effort hit the post.

The match ended with Wilmar Jordan winning a penalty for NorthEast United FC five minutes into stoppage time. His penalty was finely dispatched into the corner, but it wasn’t enough to win them their first points of the season.

NorthEast United FC will be looking to build on a decent second-half performance when they host ATK Mohun Bagan on December 24 at the Indira Gandhi Athletic Stadium in Guwahati. They remain at the bottom of the ISL table. FC Goa, on the other hand, head to the JRD Tata Sports Complex in Jamshedpur to take on Jamshedpur FC on December 22.

–  Sadaoui’s 3 shots were the most of any player in the match, but he wasn’t rewarded with a goal
–  FC Goa centre-back Anwar Ali completed 110 passes
–  NorthEast United FC goalkeeper Mirshad Michu faced 15 shots in the match