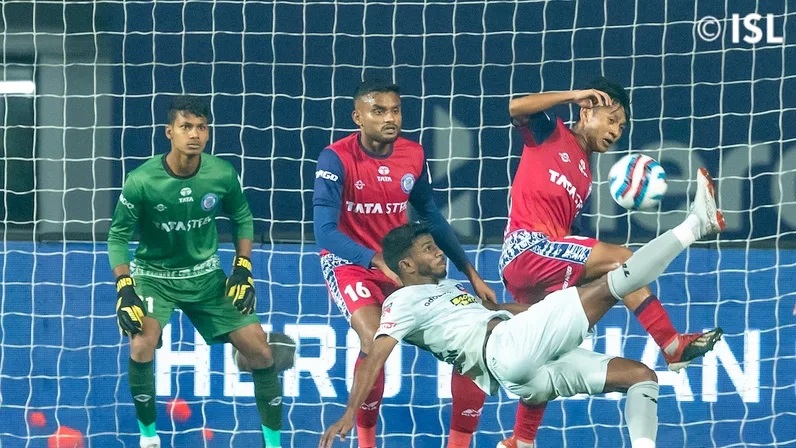 Iker’s Guarrotxena’s brace helped FC Goa kick-start the second half of their Hero Indian Super League (ISL) 2022-23 campaign with a point thanks to a 2-2 draw against Jamshedpur FC at the JRD Tata Sports Complex on Thursday.

Guarrotxena was omnipresent throughout the match – scoring once in each half for the Gaurs in addition to putting the ball into his own net in the first half. Ishan Pandita, meanwhile, netted Jamshedpur FC’s second of the night.

Earlier in the day, FC Goa head coach Carlos Pena made two changes to his playing XI that featured in the win over NorthEast United. While Brison Fernandes got his first start for the club in place of Ayush Chhetri, Makan Chothe replaced Redeem Tlang on the wings.

It was, however, Jamshedpur FC who got off to a fine start, coming close to breaking the deadlock twice in the first seven minutes. Boris Singh Thangjam was the heart of both chances, attempting a cross that went out before firing a shot from outside the box that narrowly missed the target.

They finally got the lead in the 31st minute, courtesy of Iker Guarrotxena’s own-goal. While several of Aidy Boothroyd’s men rose high to meet a corner-kick by Raphael Crivellaro, it was the Spaniard who unfortunately put the ball into his own net.

It did not take long for him to make amends for his earlier gaffe. In the 38th minute, the 29-year-old nodded home from close range off a fine cross by Makan Winkle Chothe to restore parity on the scoresheet.

Just five minutes into the second half, Jamshedpur FC got ahead once again through Ishan Pandita. A relatively harmless ball from Aibanbha Dohling found its way back to Dheeraj Singh, but Pandita whisked it off from the goalkeeper before he could control it, before slotting it calmly into an empty net.

The unexpected strike served as a wake-up call of sorts for the Gaurs, who created several chances in the minutes that followed although none of them ended up in the back of the net.

At the stroke of the hour-mark, Edu Bedia drove a fine shot from outside the box, but saw his effort skid just past the far post. Eight minutes later, the Men of Steel almost struck back through Crivellaro, whose shot was saved on the goal line by substitute Sanson Pereira.

The remainder of the half saw Aidy Boothroyd’s men playing it safe to preserve their lead and get over the finish line, but the Gaurs had other ideas as they continued to create chances after chances.

Their efforts finally bore fruit in the 90th minute, when Guarrotxena capitalized on the confusion inside Jamshedpur’s box to drill a loose ball past goalkeeper Vishal Yadav and into the goal.

FC Goa are now in fourth place on the standings, courtesy of the point earned on Thursday. Their next assignment is against ATK Mohun Bagan at Kolkata on December 28.