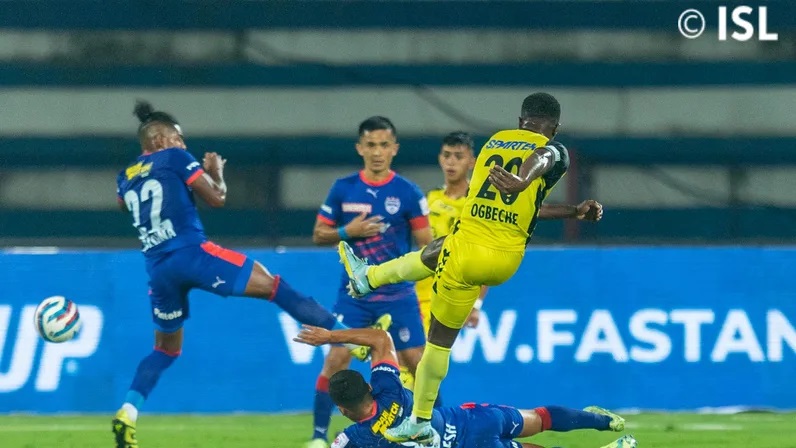 Bartholomew Ogbeche ended his seven-game goal drought as Hyderabad FC eased past Bengaluru FC with a 3-0 win in the Hero Indian Super League (ISL) at the Sree Kanteerava Stadium in Bengaluru on Friday.

The striker broke the deadlock from a cleverly-worked free-kick before forcing an own-goal out of Sandesh Jhingan at the stroke of half-time. Joel Chianese came off the bench to wrap the game up in the 90th minute.

The hosts fielded an unchanged XI, while the visitors made four changes to the side that beat East Bengal FC last week. Nim Dorjee replaced Chinglensana Singh at the heart of defence, while Joao Victor was replaced by Borja Herrera. Rohit Danu replaced Mohammad Yasir on the right flank as Javier Siverio came in for Joel Chianese, who dropped to the bench.

There were a couple of chances, one coming at each end, inside the opening ten minutes. Roshan Naorem played a clever one-two with Javi Hernandez from the left flank before his low cross was blocked by Nikhil Poojary. At the other end, Siverio sprinted with the ball down the left flank before Suresh Wangjam stopped the striker with a fair challenge.

The opening goal came when Halicharan Narzary, Herrera, and Ogbeche combined brilliantly to execute a well-worked free kick near the edge of the box that saw Ogbeche smash a low shot past Gurpreet Singh Sandhu to end his scoring drought in the 26th minute. His last goal before the seven-game drought came in the reverse fixture earlier this season.

A minute before the break, Hyderabad FC doubled their lead. Narzary whipped in a cross from the left before Ogbeche headed it into the grass. The ball was heading off-target before Jhingan’s scuffed clearance sliced it into the back of his own net as the defending champions went in at half-time with a two-goal cushion.

Substitutes combined to put the game to bed as Abdul Anjukandan’s low cross from the right was side-footed into the far post by Chianese in the final minute of the game as the Blues fell to their seventh defeat of the season.

The loss keeps them in eighth position, nine points off the last playoff spot. The Blues will travel to the Salt Lake Stadium next to take on East Bengal FC on December 30, Friday. Hyderabad FC are back at the top of the table, a point ahead of Mumbai City FC, who have a game in hand. The defending champions will host NorthEast United FC on December 29, Thursday.

– Sunil Chhetri finished his game with a passing accuracy of 92%

– Bartholomew Ogbeche finished the game with a passing accuracy of 91%