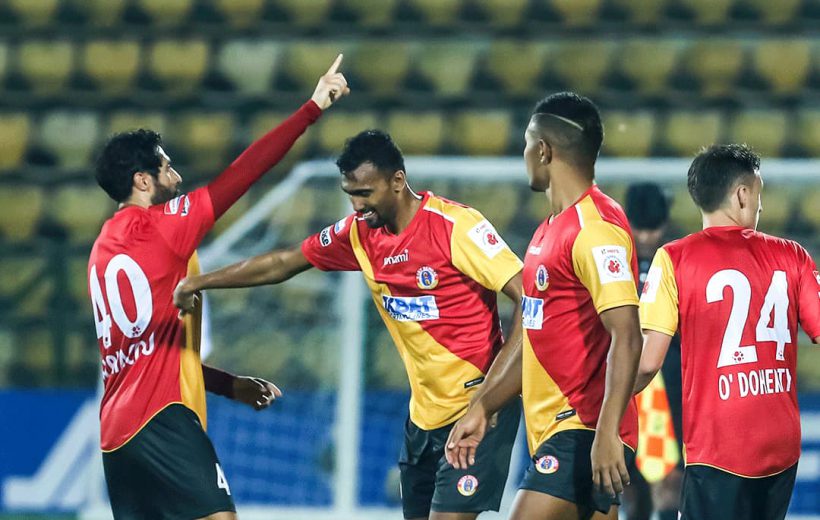 East Bengal FC broke their winless run against NorthEast United FC in the Hero Indian Super League (ISL) with a comfortable 3-1 victory at the Indira Gandhi Athletic Stadium in Guwahati.

Stephen Constantine made four changes to the East Bengal FC lineup that lost 2-1 to FC Goa. In the opposite dugout, Marco Balbul, who had now served his one-match suspension, had made one change to the lineup since the 3-0 loss to Hyderabad FC by bringing Rochharzela into the starting XI.

It took a while for the two teams to find their rhythm with the game’s first real chance coming in the 10th minute when Cleiton Silva smashed a volley from range at NorthEast United FC’s goal, but Silva didn’t have to wait long to get his goal.

East Bengal FC took the lead a minute later after some diligent work from Mahesh Naorem Singh. NorthEast United FC’s Mohamed Irshad got caught on the ball during the team’s build-up, which gave Mahesh Noarem Singh an opportunity to pinch it from the full-back before laying it to the open Silva, who made no mistake with his finish.

Silva played in a slightly deeper role just behind the forward, and found joy a couple of times in this freer role, taking a few uncosted long shots throughout the half.

NorthEast United FC had most of the possession in the first half but were struggling to create any real chances – East Bengal FC had a solid block in front of goal. Balbul decided to take some action early by making two changes in the 31st minute, bringing Emil Benny and Aaron Evans on for Romain Philippoteaux and Mohamed Irshad.

It looked like the Highlanders were going to end the half without any shots on target but a speculative effort from Emil Benny in the 45th minute led to a rebound that Matt Derbyshire should have finished. That had been the best chance of the game at the point, but Derbyshire’s effort didn’t find the target, rattling the bar instead. East Bengal FC took a 1-0 lead into half-time.

East Bengal FC started the second half with real zest. They went up 2-0 eight minutes into the second half thanks to some good work from Suhair Vadakkepeedika on the right wing, who set up an onrushing Charis Kyriakou for a bending strike from the edge of the box.

Suhair had been causing NorthEast United FC problems prior to the goal, getting close to scoring twice himself. It looked like he’d set up Thongkhosiem Haokip four minutes later with a driven cross from the right, which Haokip backheeled to put East Bengal FC 3-0 up, but the goal was ruled offside. East Bengal FC were fairly dominant in the early parts of the second half.

To shake things up, Balbul looked to his bench. Imran Khan, who was subbed in for Gurjinder Kumar in the 63rd minute, had a decent volleyed effort a minute after coming on.  Sylvester Igboun came on for Michael Jakobsen in the 71st minute, who had an even greater effect on the team. Everytime he got on the ball, options started opening up, giving his teammates and the crowd a lift.

NorthEast United FC pushed more players forward, but the risk didn’t pay off in the end. East Bengal FC killed the game in 84th minute thanks to a quick transition, with Mobashir Rahman setting up Jordan O’Doherty, who finished the chance with aplomb. With the score 3-0, the game was quite open now.

NorthEast United FC finally opened their goal account for the season two minutes into second-half stoppage time. It was the combination of Benny and Derbyshire again, with Derbyshire scoring a near-post header from an inch-perfect corner. It was too little, too late for NorthEast United FC.