Chennaiyin, Goa lock horns in the rivalry of goals 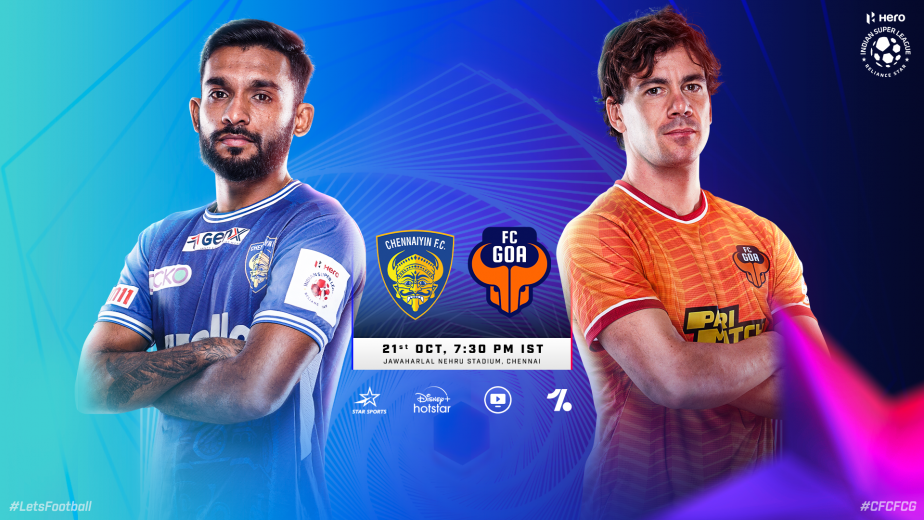 Chennaiyin FC will be looking to keep their unbeaten record intact when they host FC Goa in the Hero Indian Super League (ISL) at the Jawaharlal Nehru Stadium in Chennai on Friday, October 21.

The hosts won one and drew the other in their opening two games this season, while the Gaurs have narrowly won the only game they have played in the league so far.

There is a lot of history between these two sides as they have gone toe-to-toe 21 times in the Hero ISL. Only two of those games have ended in a draw, and 79 goals have been scored in these 21 games, making it the highest-scoring fixture in Hero ISL history.

The hosts will be without first-choice goalkeeper Debjit Majumder as he serves his suspension after getting sent off in the last match against Bengaluru FC. Devansh Dabas is expected to start in goal against FC Goa.

After coming on as a second-half substitute in both games this season, Kwame Karikari has a goal and an assist to his name. The Ghanaian will be eager to make his first start as head coach Thomas Brdaric will have to decide whether to keep things as is or bench Petar Sliskovic to give Karikari a place in the starting eleven.

“We are still building a team and are not finished. I told the players it’s a long road from beginning to end. We must fulfill our goals with the ability and strengths that we have and must possess the desire to learn from our experiences,” said Brdaric. “The last match was a bit disappointing because we only took a point, but 4 points from two games is not bad. Pursuing our target with this energy and intensity is exactly what we want.”

FC Goa will be looking to boost their potency in the final third after a narrow win in the last game. Attacking duo Alvaro Vasquez and Brandon Fernandes got just two shots on target between them. Fernandes scored with his effort, while Vasquez was denied by the keeper. Iker Guarrotxena will also look to step up his game against Chennaiyin FC.

In the last season, the Gaurs completed a double over the Marina Machans, scoring a total of six goals and conceding none. A lot has changed since then, but head coach Carlos Pena will be looking to extend that winning streak when the two sides meet next.

“Chennaiyin got very good results against two strong teams – ATKMB and BFC – and I think they are playing really well. They are going to be a tough opponent. We respect them a lot, but we are going there without fear,” said Pena.

He added, “It’s going to be a tough game for both teams, and we will face this game as any other game this season – by being brave and trying to get three points whether we are home or away.”

The two sides have faced off against each other 16 times in the league phase. The Gaurs have won ten while the Marina Machans have won five. They also met in the playoff semi-finals of Hero ISL 2017-18 and 2019-20. Chennaiyin FC knocked FC Goa out on both occasions. The Marina Machans defeated the Gaurs in the Hero ISL final in 2015 to claim the title as well.

Carlos Pena: We respect Chennaiyin FC as opponents, but we don’t fear them
East Bengal FC announce their arrival with an emphatic 3-1 win over NorthEast United FC