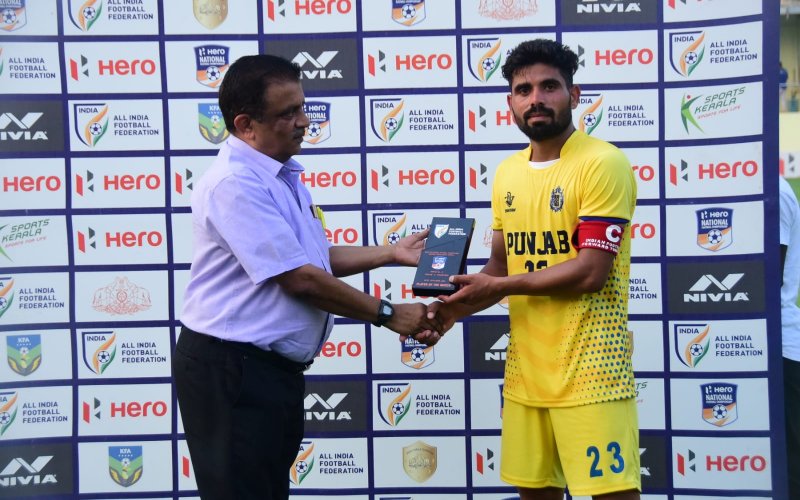 A dominant Punjab ran riot against Rajasthan, thrashing them 4-0 in the Group A clash of the Hero 75th National Football Championship for the Santosh Trophy at the Kottapadi Stadium in Malappuram here on Wednesday. Three second-half strikes which included a brace from substitute Tarun Slathia meant Punjab picked up their first win of the tournament.

Those two quick fire attempts woke up the Punjab players who then went on to boss the remainder of the first-half. Their first chance fell to Manvir Singh who drifted in from the left. A chipped pass was expertly controlled by the winger but brave goalkeeping from Rajasthan’s Gajraj Singh ensured it remained goalless.

Both the Punjab wingers kept cutting in from the flanks, which made it difficult for the Rajasthan players to mark them. Amarpreet Singh cut in from the right and unleashed a powerful left-footer from just outside the box. Gajraj Singh was left rooted to the spot and he was a relieved man as the ball went narrowly wide of the goal. 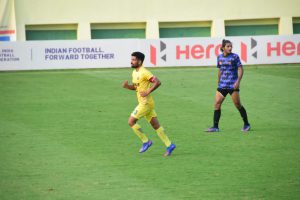 With Rajasthan dropping deeper and deeper, it was becoming difficult for Punjab to play the killer through ball. So the players in yellow resorted to taking shots from deep. Jaginder Singh’s rasping drive was parried to safety by a full stretch Gajraj. The ball dropped just in front of him which made it awkward for the goalie to save.

Rohit Sheikh then had the ball in the back of the net after some neat buildup play but the referee called play back for offside. The period of sustained pressure finally paid off for Punjab in the 37th minute. A cross from the right was headed down by Manvir Singh and a snap shot with his left foot by Amarpreet Singh finally beat Gajraj as Punjab took a deserved lead into the half-time break.

The second half was completely one-way traffic as Punjab’s players had numerous chances to increase their lead. The insurance goal came via a spot-kick in the 63rd minute. Manvir Singh cut in from the left and was tripped inside the box by Trilok Lohar. Skipper Parmjit Singh stepped up and coolly sent the goalkeeper the wrong way to give Punjab a 2-0 lead.

The goal seemed to kill the little resistance the Rajasthan players were putting in. Substitute Tarun Slathia then came on and made an immediate impact. He latched onto a lofted ball, held the defender at bay and sweeped the ball past Gajraj using his left foot to triple the advantage.

The Punjab players kept shooting at will and Gajraj had to time and again come to Rajasthan’s rescue. The fourth and final goal was once again scored by the substitute striker Tarun Slathia. Miscommunication inside the box within the Rajasthan camp gave Tarun the chance to dispatch the gift and he did so emphatically.

He had chances to score a hat-trick but Gajraj Singh denied him on two occasions. Rajasthan have the goalkeeper to thank because if not for him, the scoreline could have gotten much worse.

The win meant Punjab roared back into contention in Group A. They will gain a lot of confidence from this victory and it will be needed when they face home side Kerala on Friday. For Rajasthan, it was a day to forget and they will need to get back in the right frame of mind ahead of their clash against West Bengal on Sunday.

Hero I-League 2021-22: Story so far and what to expect
Kickstart maintains winning streak after thumping win over Sirvodem