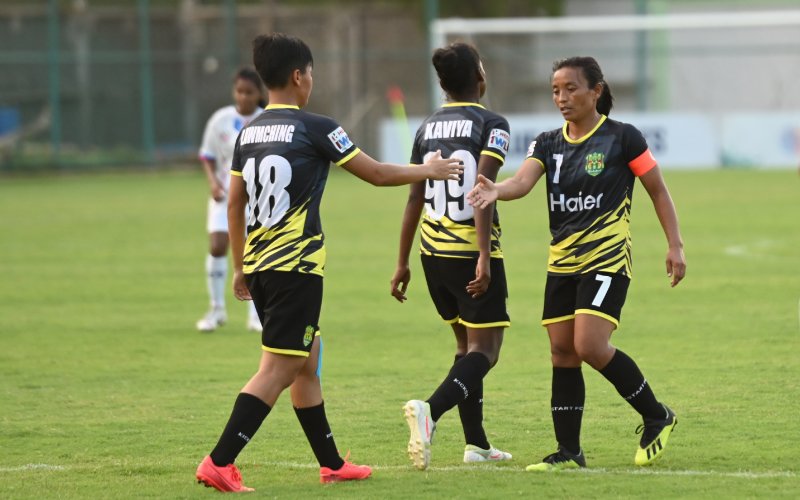 Kickstart maintain their winning streak as they hand Sirvodem a second consecutive defeat after a dominant 7-0 win in the Hero Indian Women’s League at the Capital Ground on Wednesday, April 20, 2022.

The Karnataka-based side made a quick and dominating start as they scored as many as three goals within the first quarter of the game.

Winger Kaviya opened the scoring on the 6th minute, followed by an own goal from Sirvodem defender Sharda a couple of minutes later. Kaviya once again bagged a goal contribution as her inch-perfect cross on the 12th minute was finely tapped in by Kiranbala.

Kaviya ran riots along the right-wing forcing the Sirvodem defence to stumble with the latter’s goalkeeper Afsan Ashiq fumbling frequently.

The goal shower continued with forward Roja Devi perfectly utilising the Sirvodem custodian’s howler to increase the lead to 4-0 within the 17th minute. 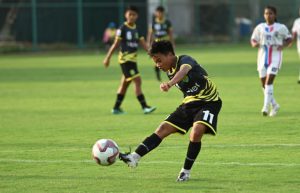 Kickstart kept a large proportion of the possession all through the game with their continued domination, rattling the Goan side. Babysana pulled the strings from the midfield as the Karnataka-based side orchestrated waves of attacks, one of which led Prameshwori Irom to score the fifth goal on the 25th minute.

Minutes before the halftime break, Indian international Roja Devi earned a brace for herself as she found the back of the net, making it a six-goal lead for Kickstart FC, going into the breather.

Changing over, Sirvodem came out with a lot more intent and held their shape for large parts of the game. They kept their opponents at bay, preventing Kickstart from scoring more until substitute Lawmching found the net with less than 10 minutes of regulation time left on the clock.

With this win, Kickstart climb to second on the Hero IWL table with six points from two matches, and a goal difference of nine.