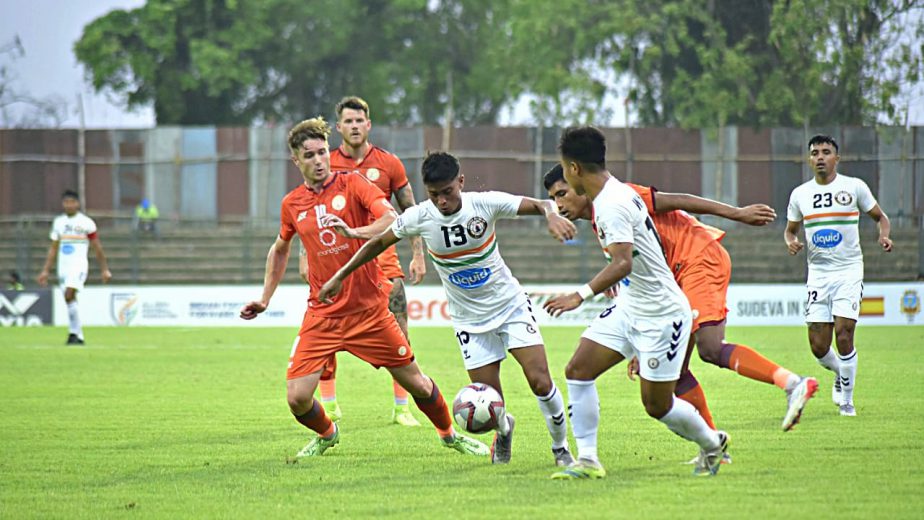 Sudeva Delhi’s defensive woes came to the surface yet again as they lost the Hero I-League 2021/22 contest against RoundGlass Punjab FC at the Kalyani Stadium on Saturday. The Delhi club sat well at halftime with a 2-0 lead, courtesy of goals from Sreyas VG (5′) and Abhijit Sarkar (39′). But two own goals from Vanlalzudika (46′) and Souvik Das (55′), and another goal from Sumeet Passi (49′) turned the tide of the game in the second half and RoundGlass Punjab FC picked up a stunning comeback win.

Sudeva Delhi FC got off to a dream start as Sreyas V G put his team ahead in just the fifth minute of the match. Sreyas received the ball at an awkward angle, but he controlled the ball well, turned around, and slotted it past RoundGlass Punjab FC goalkeeper Jaspreet Singh to give his team an early 1-0 lead.

In the 10th minute, Akbar Khan dribbled past RoundGlass Punjab FC’s defence to enter the six-yard box. But his last touch went a little strong and RoundGlass Punjab goalkeeper deflected it outside. The ensuing corner yielded nothing dangerous and Sudeva Delhi FC reassembled once again. In the 20th minute, Sumeet Passi sent a searching ball inside the box, but it was well defended by Sukhandeep Singh. The ball landed at Fredy Lallawmawma’s feet, who went in for a shot from a distance, but the ball went above the goalpost.

Three minutes later, a sloppy reverse pass led to Maheson Tongbram grabbing the ball and going in for a one-on-one chance against Sudeva Delhi FC goalkeeper Sachin Jha. But a heavy touch from Maheson allowed Sachin to come forward and deflect the ball away.

In the 31st minute, Travis Major broke through and provided a beautiful cross in a dangerous area for Kurtis Guthrie, who headed the ball in the back of the nets but the Englishman was deemed offside and the goal was disallowed. In the 39th minute, Sreyas made a long pass inside the box for Abhijit Sarkar, who flicked it over the rushing goalkeeper to double Delhi’s lead. RoundGlass Punjab FC kept the possession as the clock ticked down in the first half, but could not reduce the deficit before halftime.

The momentum completely shifted as RoundGlass started dominating the play. In the 54th minute, another attacking move against Sudeva Delhi FC led to Souvik Das scoring another own goal and RoundGlass Punjab FC completed the turnaround, taking a 3-2 lead within just 10 minutes into the second half of the game.

Taking the lead, the football club from Punjab planted themselves deep inside their own half and slowed down the pace of the game. Abhijit Sarkar and Sreyas VG continued to search for penetrating runs inside the box, but the deep defensive line remained on alert and prevented any dangerous attempts. In the 73rd minute, Sachin Jha made a terrific save to deny Joseba Betia as he came forward and made himself big and strong against a scoop from the RoundGlass man. The ensuing corner did not yield any opportunities.

As the game entered the 80th-minute mark, Sukhandeep Singh went in for a desperate attempt from 20 yards out but he was unable to trouble RoundGlass Punjab’s defence. In the 88th minute, Chesterpoul Lyngdoh turned around and went in for a shot from outside the box, but he hit it straight to the goalkeeper and it was easily saved.

In injury time, Kurtis dribble past Zuidika and went in for a shot from a tight angle, forcing goalkeeper Sachin Jha to dive to his right to make the save. Soon after, the referee blew the final whistle, and RoundGlass Punjab completed a stunning comeback, returning to winning ways after three games.

Also Read: Back and forth contest between Indian Arrows and Real Kashmir ends in draw

Back and forth contest between Indian Arrows and Real Kashmir ends in draw
Jakhonov, Pritam Singh take Rajasthan United into top 7