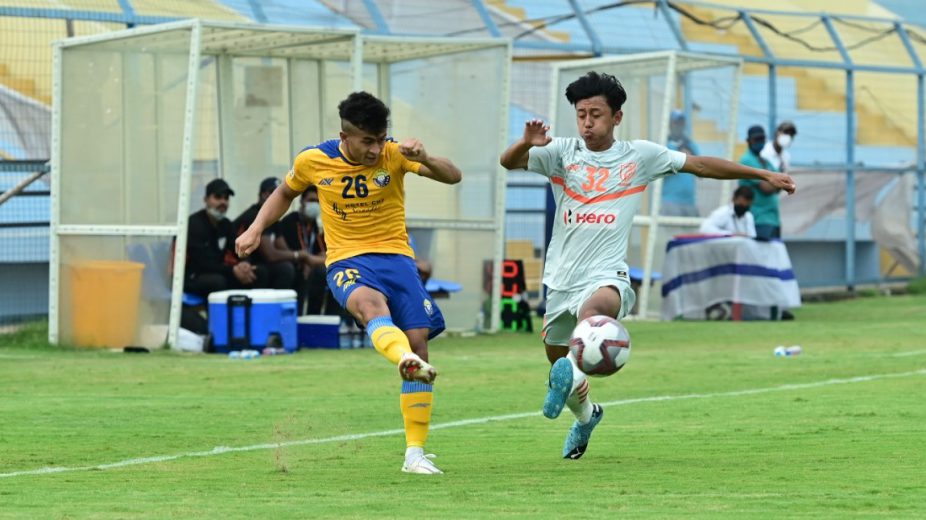 There was nothing to separate the two sides as Real Kashmir and Indian Arrows battled it out in a 1 – 1 draw at the Naihati Stadium in the Hero I-League on Saturday. After Vibin Mohanan gave the young Indian Arrows the lead with a long range strike in the 77th minute, Jong-Oh Park equalised for the Snow Leopards five minutes later to end the game with both teams taking away a point from the encounter.

The first few minutes of the contest showed glimpses of the patterns of play that were going to be followed by either side throughout the first half. Real Kashmir played direct, attacking football; relying on their forwards Mason Robertson and Tiago Adan to provide the cutting edge in the final third of the pitch. On the other hand, Indian Arrows tried to employ a short passing style of football, moving the ball about in a structured manner and building up attacks with patience.

Real Kashmir had the stronger first half off the two teams, coming close to breaking the deadlock on a number of occasions. In the 16th minute, Real Kashmir forayed forward on a counter attack led by the skipper Mason Robertson. Robertson carried the ball into the opposition half before releasing Tiago Adan down the left-hand side. Adan showed great intent by taking on his defender in a 1v1 situation and unleashing a fierce shot on target. The shot arrowed right towards Zahid Bukhari, who made the save.

Robertson came close to opening the scoring three minutes later. After what seemed like a spell of pinball inside the Indian Arrows box, the Scot followed his own header to leap once again and nod the ball over Zahid Bukhari, but his header lacked the power to beat the back peddling defender, who cleared the ball off the goal line.

The best chance of the first half came along for the Snow Leopards in the 28th minute. Real Kashmir had been feeding Robertson with long and direct passes in the opposition box all throughout the contest. The Real Kashmir captain’s aerial prowess posed a difficult challenge for the Indian Arrows defence all along. This time, Robertson warded off challenges from three defenders surrounding him to set up teammate Samuel Kynshi, who failed to apply the finish from close range as his effort blazed over the bar.

The Indian Arrows were living dangerously in the first half, but saw out the turbulent period to go into half time on level terms.

The second half resumed the action with the game following a similar pattern as the first half. It took 5 minutes in the second period for Real Kashmir to muster their first shot on target following the break. Bernard combined with Robertson in a tight space inside the box and fed his captain through on goal, but Robertson’s tame effort was saved easily by Zahid Bukhari.

Nine rounds into the Hero I-League 2021-22 season, the Indian Arrows have shown that they are an adept ball playing side. The next stage of the young side’s development will be towards building on their sharpness as an attacking unit and providing more of a goal threat consistently.

The game beckoned for something special to break the deadlock, and Vibin Mohanan delivered exactly that for the Indian Arrows in the 77th minute. Tankadhar Bag moved infield with the ball and played it to Vibin Mohanan, who took a first time shot from outside the box that was placed perfectly away from Bilal Khan, who dove at full stretch but could get nowhere near the ball as it nestled into the back of the net.

Now trailing against the run of play, the Snow Leopards found a response five minutes later. Rohmingthanga Bawlte played in a cross into the back post from the right flight flank, and Park arrived into the Indian Arrows box to finish with a first time volley back across goal.

With the momentum back in favour of Real Kashmir, Indian Arrows defended heroically to deny their opponents a further chance to grab a late winner, as the game finished 1 – 1.