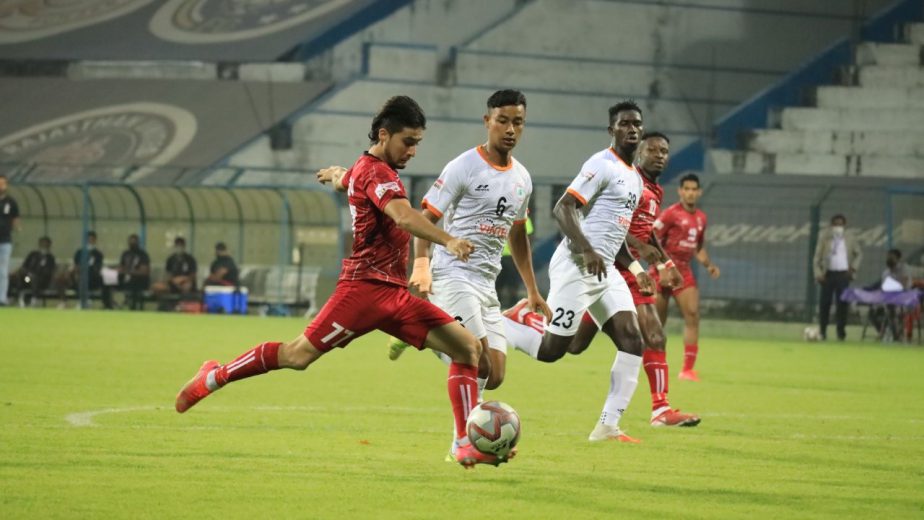 Churchill Brothers FC Goa were at their sublime best as they handed NEROCA FC their first defeat of the season 4-2 in the Hero I-League on Friday at the Kalyani Stadium. With this, Churchill Brothers have moved to the sixth position in the table. Saurav Mandal, Komron Tursunov, Ikechukwu Kenneth Ngwoke, and Gnohere Krizo were on the target for Churchill Brothers. Meanwhile, Sergio Mendiguchia Iglesias netted a brace for NEROCA FC.

Churchill Brothers were close to netting the first goal and securing the lead inside two minutes but Tursunov missed a sitter after getting set by Gogou through a long ball. They continued to press and did not have to wait long for their opening goal as Mandal broke the deadlock in the ninth minute.

Tursunov set up the goal by passing a through ball to Ngwoke, who forwarded it to Mandal and the defender finished the job. Churchill Brothers looked unstoppable at the start as they created another chance a minute later but it was cleared out of the danger zone by a NEROCA defender.

However, NEROCA FC were not ready to bow down without a fight as they looked to gain control of the game by increasing their possession of the ball in the middle. But it was not enough to stop their in-from opposition as they created yet another chance in the 24th minute. And, once again, Tursunov failed in converting it as he hit the goal post after being set up by Bryce Miranda.

Four minutes later, Tursunov was awarded his third opportunity and this time he was on target. Mandal provided the assists as Churchill Brothers went 2-0 up.

NEROCA FC looked more strategic and in control of their game during the second half as they looked to build pressure on the Churchill Brothers. The counter-attacking worked as Sergio Mendiguchia Iglesias pulled one back for his side in the 50th minute.

And, just when things started getting their way, NEROCA FC conceded a penalty, giving the opposite side another chance to double their lead. Ikechukwu Kenneth Ngwoke converted the penalty from the spot, making it even more difficult for the Orange Brigade to crawl their way back into the game.

Churchill Brothers were also not ready to give up on their attacking and aggression, despite netting three goals, which led to two of their players picking a yellow card. Kingslee Fernandes was penalized in the 64th minute while Komron Tursunov picked a yellow card in the 72nd minute for his foul on Mohammad Kdouh.

Gnohere Krizo netted the fourth goal for Churchill Brother in the 89th minute to all but seal NEROCA FC’s fate.

Sergio Mendiguchia Iglesias scored the consolation goal for his side deep in added time from close range to lessen the margin of the defeat.