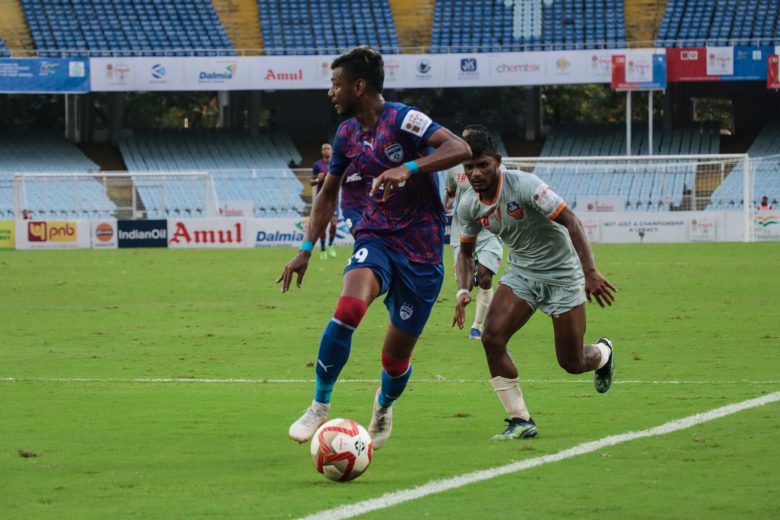 Kolkata, Tuesday, August 30, 2022: Champions FC Goa (FCG) bowed out of the 131st IndianOil Durand Cup but on a high, after their young squad held a Sunil Chhetri led Bengaluru FC (BFC) to an entertaining 2-2 draw in a Group A encounter here at the Vivekananda Yuba Bharati Krirangan (VYBK). The Gaurs came from behind in the second half to share the spoils with Phrangki Buam and Lesly Rebello scoring to cancel out first half goals by Sunil Chhetri and N. Siva Sakthi.

All 47 games of the 131st IndianOil Durand Cup are being telecast LIVE on Sports18 1 SD & HD andSports18 Khel as well as livestreamed on the Over the Top (OTT) platform VOOT!

Bengaluru shine in the first half

The Blues dominated the game from the start and had the majority of the possession in the first half. They did not give the Gaurs any chance to settle down in the game. They were creating openings in the Gaur’s half and putting pressure on the youngsters.

The first goal came in the 24th minute from a free- kick, after Rohit Kumar was fouled just outside the box. Sunil Chhetri curled one delightfully into the top right corner to give BFC a deserving lead. It was the talisman’s third goal of the tournament.

BFC continued to dominate in the middle with Bruno Ramires in particular, who was providing accurate balls to the wingers Udanta Singh and Namgyal Bhutia. The pair were always willing to run into the open spaces left by the Goan defence.

One such ball from Bruno found Udanta who headed it across the six-yard box for N. Siva Sakthi to score his second of the tournament and double BFC’s lead.

BFC began the second half brightly but FCG showed more vigour and hunger to comeback in the game. They started to press higher up the pitch and started to create more chances. The BFC midfield and defence came under pressure and the first goal came from a mistake by them.

A weak header to the keeper by Rohit Kumar was poached by Buam, who rounded off keeper Amrit Gope, to finish with consummate ease.

Goa had their spirits up and started to have even more meaningful attacks. The second goal came in 63rd minute from a darting run by Vasim Inamdar, who pushed the ball ahead for Captain Lesley Rebello to finish from in-between the keeper’s legs.

The Gaurs ended their IndianOil Durand Cup campaign with four points while Bengaluru have seven points from three games.

Next match of Bengaluru FC

Bengaluru FC will play Mohammaden SC on September 2nd to decide the Winners of Group A.