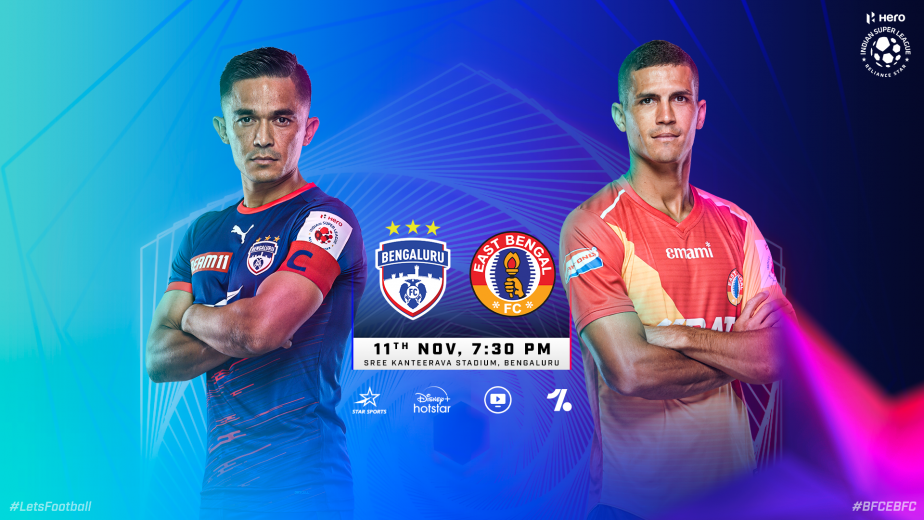 After an extended break, a rejuvenated Bengaluru FC are back in action in the Hero Indian Super League (ISL) as they face East Bengal FC at the Sree Kanteerava Stadium in Bengaluru on Friday.

Both sides will be itching for glory after dropping all available points in their previous two encounters.

Bengaluru FC have taken just four points and scored only two goals from their opening four games of the season. This is their joint-worst start in the Hero ISL, replicating last season’s results. According to their head coach, Simon Grayson, the extended break came at the perfect time. The Blues were plagued by injuries and the interval allowed quite a few players to recuperate.

“It [the break] has been really good for us. This was probably the best time for it because we had a lot of injuries going into the game against Odisha. On Friday, we will have a lot more players available in the key areas of the pitch,” said Grayson. “It has allowed us to get good work done in training. Full credit to the players who have worked extremely hard and I’m pleased with what we’ve done during this break.”

The front three of Roy Krishna, Siva Narayanan and Sunil Chhetri are expected to start. Alan Costa will likely return in defence alongside Sandesh Jhingan and Aleksandar Jovanovic.

East Bengal FC have a few injury concerns of their own. Alex Lima has returned to training after his hamstring injury. However, the attacking midfielder is unlikely to feature against the Blues. Aniket Jadhav is ill, while Souvik Chakrabarti has been ruled out after contracting dengue.

“Have we been good in all our games? No, we have not, and I don’t expect us to be faultless for 20 ISL games. It is not possible. We are new, fresh and trying hard to build a foundation for EBFC for the future. We cannot change the past. We can only change what happens next”, said Constantine. “They [BFC] have one of the biggest budgets in the league. They have a settled team and their new coach, Simon, has good experience. They will be a difficult team to play against, as are all the teams in the ISL. There are no easy games,” he added.

The two sides have played each other on four occasions in the Hero ISL. The Blues have won twice while the Torch Bearers registered a solitary win in the 2020-21 Hero ISL. Bengaluru FC have lost just four games out of 32 at the Sree Kanteerava Stadium. This will be East Bengal FC’s first Hero ISL game at the venue.