Azza, Kiran on mark as Mumbai Kenkre hold Mohammedan Sporting to a 2-2 draw 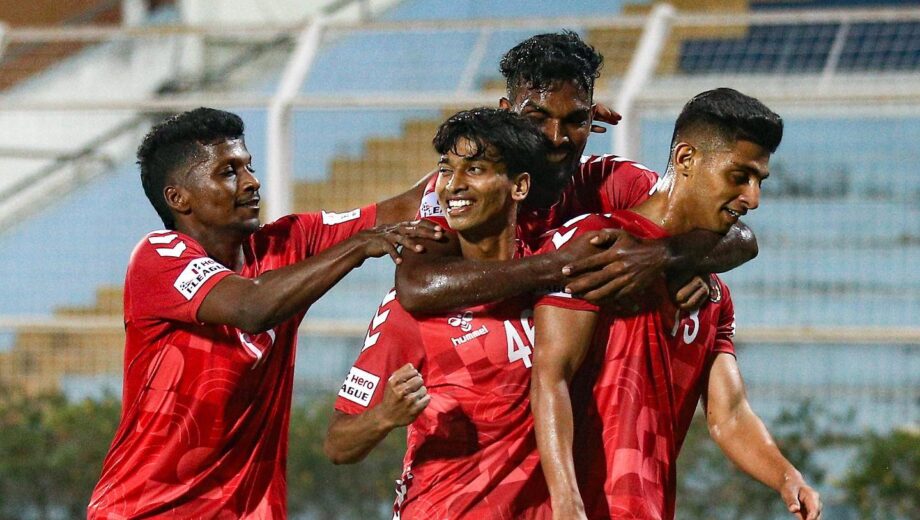 Mohammedan Sporting dropped points at home for the first time this season when they were held 2-2 by a spirited Mumbai Kenkre FC side.

Mohammedan Sporting took the early lead thanks to captain Marcus Joseph’s great long-range strike before Azfar Noorani equalized for Mumbai Kenkre at the stroke of half-time. Abiola Dauda’s header put the Black and White Brigade ahead again at the hour mark but the Mumbaikars responded yet again with skipper Kiran Pandhare’s goal 15 minutes from time.

Mohammedan Sporting dominated the ball straight from kick-off, building from the back and using the wings to penetrate the opponent’s box. The constant pressure in the early minutes benefited the home side as they gained the lead of the match in the 10th minute. Skipper Marcus Joseph, set up by Abiola Dauda on top of the penalty area, fired a half-volley into the bottom right corner of the goal, giving no chance to Kenkre’s custodian Tenzin Samdup. Mohammedan didn’t take their foot off the gas after the early lead and defender Abhash Thapa hit the post in the 19th minute with his attempt from distance.

Midway through the half, Mohammedan gave away a few unnecessary free kicks close to their penalty area, however, the visitors couldn’t capitalize due to their rather poor quality of deliveries from set pieces.

In the final 10 minutes of the half, Mohammedan created multiple chances in their hunt for a second goal but to the home team’s misery, Kenkre scored the equalizer against the run of play in the add-on time. Aman Gaikwad took advantage of a slip from Abhash Thapa before feeding the ball into Azfar Noorani’s path. Noorani continued the run on the left before beating the Mohammedan goalkeeper Zothanmawia with his convincing left-footed strike into the roof of the net.

Mohammedan continued to attack the Kenkre half in the second half and almost found the back of the net in the 50th minute. A shot from Faiaz inside the penalty area was saved by the right boot of goalkeeper Samdup.

The Black and White Brigade regained the lead of the game at the hour mark. A teasing delivery into the box from Joseph found Dauda near the six-yard box. The Kenkre defense failed to clear their lines as the Nigerian striker made no mistake, diving low to head the ball into the back of the net.

The Mohammedan lead lasted only 15 minutes as the Kenkre captain Kiran Pandhare got the visitors back into the game. Noorani took a corner kick and after a series of missed clearances and failed shots, the ball ricocheted and found its way to Pandhare at the far post, and the midfielder slotted in the equalizer.

The final quarter of the game saw a level of urgency displayed by the home team, while the visitors looked content to play for a point. Mohammedan created a late surge to find the winner, however, the hosts didn’t have enough left in the tank to take the lead for the third time.

Both Mohammedan Sporting and Mumbai Kenkre now have seven points from seven games played with the Kolkata club sitting just above Kenkre, in the ninth position, thanks to a better goal difference.