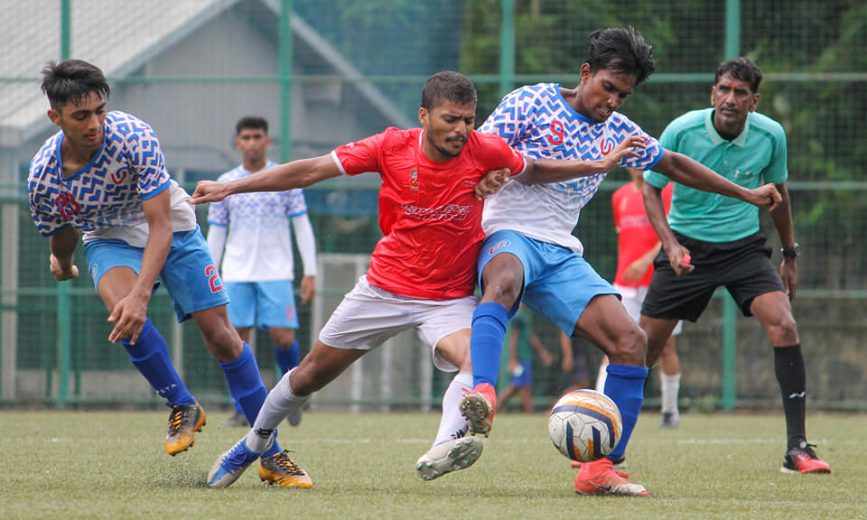 UBI remained at the third spot in the MFA Elite Corporate League table after dropping points against Air India in a 0-0 stalemate played out at Cooperage stadium.

The game began with UBI taking the attack to their opposition earning two free kicks in the early minutes. The first free kick was taken by Gaston D’silva, whose effort sailed over the bar while Saurabh Nikam’s strike went just wide.

At the other end, Air India’s Abhinav Sebastin’s cross found Mrunal Tandel, whose first time shot on the volley went just over the bar. Few minutes later another cross from Abhinav was headed goalwards by Ansari only to be denied by an acrobatic save from UBI Goalie. As the rebound fell for Mrunal, UBI defenders were alert enough to block it away as both sides entered the break still 0-0.

In the second half, Air India dominated the proceedings early on but failed to break through UBI’s defense. At the other end, UBI had a golden chance to break the deadlock when Athang Kanekar’s delicious cross was missed by Gaston in front of an open goal with UBI Goalkeeper out of his position.

In a moment of some exquisite football action, Air India played some brilliant quick 1-2 passing between their attackers but failed to find the finishing touches. At the other end, Gaston had another opportunity from a free-kick positioned just outside the box only for his shot to go wide.

With time running out and Air India’s defense holding strong, UBI’s Athang Kanekar and jersey no 12 Om Rane tried their luck from distance but their efforts went inches wide of the post. The game eventually ended goalless as both sides went away with a point each.