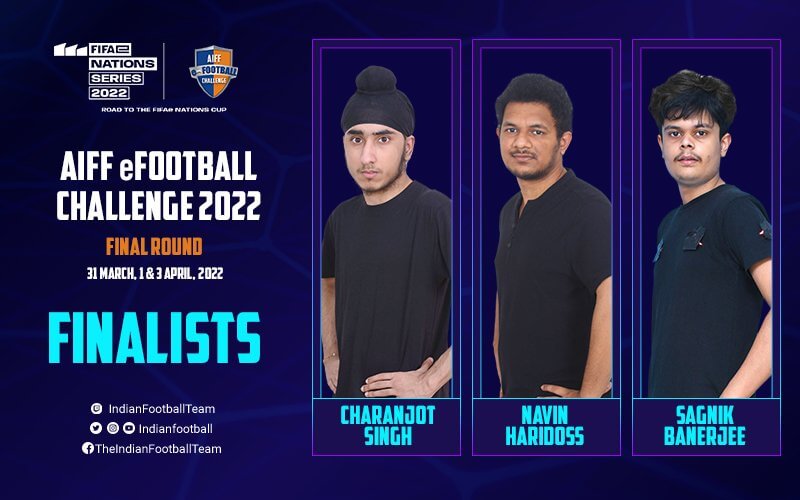 The AIFF eFootball Challenge 2022 Final is just around the corner, and a tournament that started with 20 of the best players from across the country, is now down to its final three.

Out of the 20 that had taken part in the Final Stage of the AIFF eFootball Challenge, 11 were seeded Athletes, while the other nine had made it through to the tournament via the four Monthly Qualifiers. Now, three of the Athletes are all set to fight it out in the Finals on Sunday, April 3, 2022, to be crowned the champions of the AIFF eFootball Challenge – Navin Haridoss, Sagnik Banerjee and Charanjot Singh.

The Finals will be played out between the three aforementioned players in a bracketed format, where Navin Haridoss and Sagnik Banerjee will play each other in the Upper Bracket Final – the winner progresses to the Grand Final, while the loser goes into the Lower Bracket Final against India’s no. 1 seed Charanjot Singh. The winners of the Upper and the Lower Bracket finals will face each other in the Grand Final, that will decide the championship.

Navin Haridoss, who will be a part of the commencement of the Finals in his Upper Bracket match against Sagnik Banerjee, will take heart that he had defeated India’s top-ranked player Charanjot Singh, in the lead up to the Finals.

“It was a very proud moment for me. It was a crucial match and I had to win it against Charanjot. After losing the first leg, I was under a lot of pressure going into the second leg. But I knew all I had to do was to play my best game. Fortunately, I was able to win the match, and that too, against one of the best players in Asia,” said Haridoss.

Sagnik Banerjee is one who believes that the AIFF eFootball Challenge has become all the more challenging due to the open monthly qualifiers.

“It’s a great feeling to reach the final, I feel like out of this world. But the AIFF eFootball Challenge has stepped up a notch this season in terms of its competitiveness. After the inclusion of the open monthly qualifiers, giving every player (in India) a chance to represent themselves at the biggest stage,” said Banerjee.

Charanjot Singh, who is the only Finalist at the AIFF eFootball Challenge to have made it to both the 2021 and the 2022 Finals, feels that there is now a competitive gaming scene in India.

“Things have changed a lot in the last year. The FIFAe National Team, of which I am also a part, has been performing consistently well in the ongoing FIFAe Nations Series 2022. We now have a proper domestic league and many new faces have emerged in the competitive football gaming scene,” he said.

The AIFF eFootball Challenge Finals 2022 will get underway on Sunday, April 3, at 5 PM IST, and can be streamed Live on the Indian Football’s Twitch and YouTube handles.